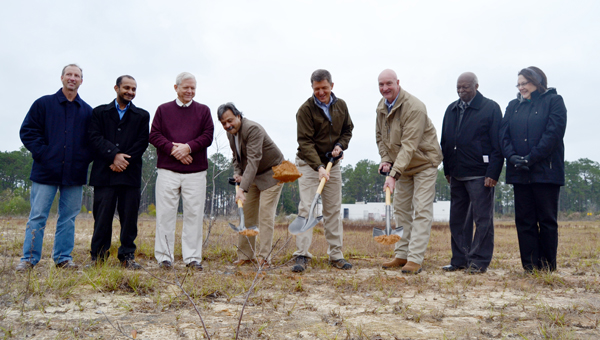 City officials and hotel managers broke ground on a new Hampton Inn facility Wednesday on a site location off of State Highway 27 that is expected to be completed in 2015.
The location, next to Tractor Supply, will be a three-story hotel that will feature 71 rooms according to managers. This will provide more lodging for the city’s various events and tournaments as well as overflow from events in surrounding areas like Tallahassee. The project is expected to wrap up in January 2015.
Work will begin on the site within the week, site manager Warren Hiett said Wednesday.
“We are awaiting a permit to begin construction, so we will be initiating the first steps hopefully immediately,” Hiett said.
Hiett said site work would start first, connecting to existing water and sewage lines. Then within the month of December, footings for the building would be poured.
Rahul Kaushik and his family operate Brann Hospitality, and the hotel will be their tenth facility in the region. Kaushik said the family has wanted to come to the Bainbridge market for some time.
“We are really happy to be coming here finally,” Kaushik said. “In terms of employment, the hotel should provide about 25 jobs.”
Hiett assured the project would be utilizing local contractors and they would buy local materials when possible, “We are just trying to keep it as local as we can.”
City of Bainbridge manager Chris Hobby said the new project would benefit the city, not only in the creation of jobs, but also in promoting activities and events.
“This is something we have needed for our tournaments and our fishing events,” Hobby said. “All of the events we have, as well as the average traveler, will all benefit from more lodging.”
Hobby said he hopes the hotel will generate more activity and also encourage further development of restaurants and lodging space.
The project, Kaushik said, will be completed in December 2014, but should be ready to open in January 2015.