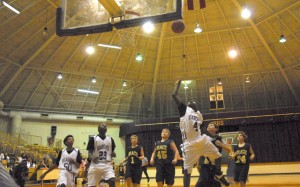 The Lady Cats defeated the Lady Cougars again, making the final score 27-17. The Bearcats were also able to pull off another victory against the Cougars 57-11, putting them at 3-1 for the season.
The Lady Cats and Lady Cougars faced off first. It was a close match for the majority of the game, but the Lady Cougars quickly fell behind in the fourth period.
“I am extremely proud of this group of young ladies,” Lady Cats coach Dorothy Pierce said. “I believe that they will continue to develop as the season progresses. They hustled during the game and they are beginning to eliminate turnovers. They are playing as a team and executing plays.”
The Lady Cats showed a strong fight despite falling behind in the second half.
“We just couldn’t get any shots,” said Lady Cats coach Mallory McCrae. “We’ll just be focusing on fundamentals for the next game. They really hustled today. I was proud of them.”
The Bearcats and Cougars took the court next. The Bearcats began the game aggressively outplayed the Cougars through the entire game, pressing and intercepting the ball exceptionally well.
“The boys are really starting to execute the offense more efficiently as we continue to play through the season,” head coach Patrick Clark said. “They are sharing the ball on offense and pressing the ball on defense.”
Despite the Bearcats raking in an impressive amount of points, they weren’t able to hold off from fowling the Cougars often.
“Team fouls are starting to become a problem,” Clark said. “We must do a better job of sliding our feet and not reaching for the basketball.”
In the first half, the Bearcats played man-to-man. They switched to zone in the second half and game the Cougars some shot opportunities.
“We have to work on execution,” Cougars coach Rob McCrae said. “When they were playing man-to-man, we just couldn’t get past them.”