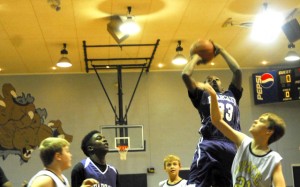 Seventh grader Kenya Hughes leaps in the air after driving toward the goal for a shot. Hughes scored a total of seven points against the Cougars Monday night — Powell Cobb

The Bainbridge Middle School seventh graders clashed with the Grace Christian Academy JV teams Monday night at GCA’s stadium. The Bearcats and Lady Cats both game home with wins, 48-20 and 20-11, respectively.
The Bearcats took the court first against the Cougars, and they took it fast, outmatching their opponents for the first half of the game. The Cougars outscored the Bearcats in the second and fourth periods, but weren’t able to get the job done.
“They played exceptional basketball,” Bearcats coach Patrick Clark said. “We got off to a great start and really kept the temp of the game fast by pressing the ball on defense and fast breaking when possible.”
Cougars coach Rob McCrae was proud of the way his players competed despite the loss at home.
“In terms of effort, it was all there,” McCrae said. “We missed 15 foul shots, so it might have been a little closer of a game.”
For the Bearcat’s, Toney Worlds scored nine points, followed by Kenya Hughes with seven. On the Cougars side, Jared Duke and Austin Holcombe both raked in six points with Colin Woodrum scoring four.
Following the boys’ game, The Lady Cats took the Lady Cougars and won the first game of the season 20-11.
“I think the Lady Cats have begun to have a better understanding of the game of basketball,” Lady Cats head coach Dorothy Pierce said. “I’ve seen a lot more execution of plays and hustle.”
Mycha Harris lead the Lady Cats with 13 points total, followed by Zycheria Russ with five points.
“As we continue our season, we will focus on eliminating turnovers and improving basic fundamentals,” Pierce said.