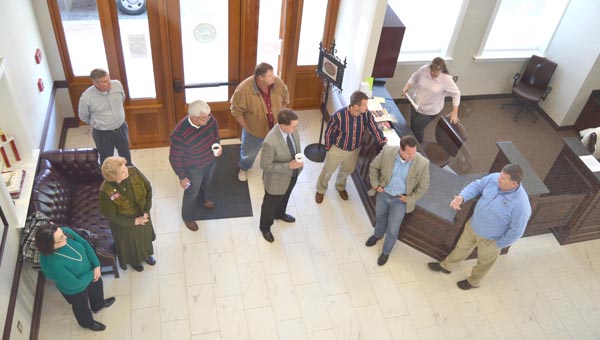 Members of the legislative delegation arrived to Bainbridge’s community center on Potter Street Thursday morning to tour the city and recharge old relationships with the Bainbridge City Council, while forging some new ones.
The annual Hometown Connection meeting is one that allows those representatives of Bainbridge at the state level to observe projects going on, like the expansion of the River Walk and new Bainbridge City Hall building.
“This is very valuable for us because it allows you time with your legislative delegation to just form a networking point,” Bainbridge City Manager Chris Hobby said. “It lets them get to know your key staff people so that if they have issues or something comes up at the state level, they can maybe reach out to us. This benefits us because we can have an impact on legislation that will impact us later on.”
State Reps. Jay Powell and Darlene Taylor and Sen. Dean Burke accompanied council members and other department heads for the city on a tour.
Hobby said the days of cities holding their hands out for money from the state are over, “because there is no money to give anymore,” Hobby said.
Instead the city wanted to focus on relationships and possibly keeping the delegation about what legislation would be harmful to the city.
“I enjoyed seeing a lot of Bainbridge. I have worked over here for years with clients,” Taylor said. “However I did not realize how wonderful the recreation department is — it looks wonderful and I’m looking forward to the expansion of the walking trails.”
Sen. Burke said because he is a council member and lives in Bainbridge, he was already informed of the new projects in the city.
“But as far as [The Hometown Connection] process, it’s a great thing they are doing this because communication is key to local governments and the state working together,” Burke said.