Ag industry workers thanked for their impact at annual luncheon 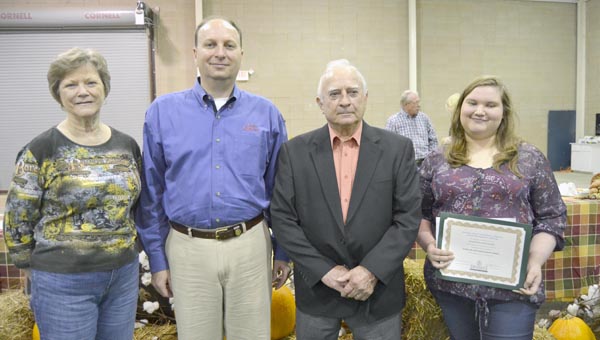 Hundreds of men and women dedicated either directly or indirectly to the heart of Southwest, Georgia  — the agricultural industry — gathered to long farm tables at the Cloud Livestock facility Friday for the Ag Appreciation Luncheon.
Sponsored by the Bainbridge-Decatur County Chamber of Commerce and many local businesses, the Ag Man and Ag Woman of the Year were presented and a high school scholarship recipient was selected.
Alec Poitevint, 2012 GOP chairman selected to manage the Republican National Convention in Tampa and former chairman of the Georgia Ports Authority, spoke to those dedicated to the agricultural trade and shared insight into the impact they are having statewide. Poitevint shared how much the Savannah port and others are growing comparatively to ports around the nation, in part due to the high agricultural yields of peanuts and cotton.
“If you take all of the container ports in America and put them together, there are a couple of things that are interesting — one is that the largest container port in American is in Savannah,” Poitevint said about one particular port category.
He said the compounding growth rate seen by the Savannah port is twice that of Newark, New Jersey and three times that of ports on the West coast like Los Angeles and Long Beach, Ca. “We are growing because we have the export base to give us that balance and without a strong agriculture base in southwest Georgia, we wouldn’t have this.”
J.B. Kendrick was named Ag Man of the Year for his life’s work in farming in the region. Kendrick has farmed since the times of WWII and is still involved in the industry today with timber. He lives on his family farm just yards away from where he grew up.
Kathy Hornsby was named Ag Woman of the Year. She worked for 45 years with Rentz Family Farms as a bookkeeper and became one of the family members.
Jim Rentz of Rentz Family Farms introduced Hornsby and said Hornsby worked for Rentz Farms beginning in 1968, working for his grandfather.
“Quickly the farmers knew she could, and would, dispatch their trucking and irrigation needs, all of this before computers,” Rentz said. “We always wondered how she could handle wearing all of these hats while still having time to have a 9 a.m. coffee break with the farmers in the office gathered every morning. Now she is seeing a fourth generation of farm workers come in.”
Savannah Locke received the Bainbridge-Decatur County Chamber of Commerce Mitchell May Agricultural Scholarship.
The award is for $1,000 towards a college education.
Marlene Free announced Locke as a student striving for a degree in agriculture. Her long-term goal is to get a PhD in agriculture and applied economics.
“Agriculture has done more than impact my life and influence my decisions, agriculture has helped me define who I am,” Locke wrote in her scholarship essay.
She is president of the Interact Club, member of the teacher apprentice program and teaching in the Ag program at Bainbridge middle school.