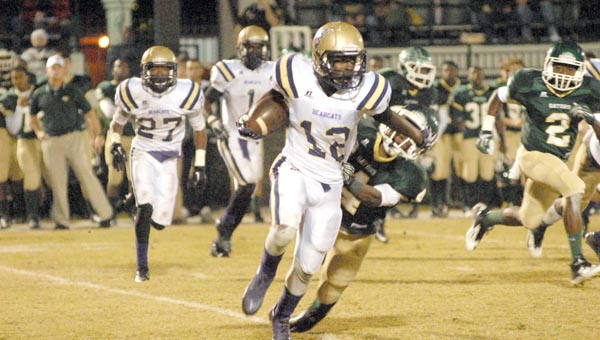 Sophomore running back Elijah Taylor shakes off a Gator defender, above, as he charges up field during Friday’s game against Ware County. Friday was Tyler’s first time playing as a running back,rushing for 91 yards on 13 carries. — Jeff Findley

The Bearcats suffered a tough loss to the Ware County Gators Friday night at Memorial Stadium, falling 49-7.
As the last game of the season, Bearcat seniors left their hearts on the field.
Senior quarterback Preston Norris threw six for 10, throwing 115 yards. He threw two interceptions and was sacked twice.
Norris said he was disappointed that the season ended the way it did.
“I wanted to win at least the playoff game before I left, but it didn’t happen,” Norris said. “Ware County was a tough team. They were really good and just dominated everywhere.”
Norris said Ware County’s defense wasn’t anything different from what they’ve seen all year, but they just ended up a stronger team by the end of the night.
The Bearcats’ big touchdown play was a 66-yard pass from Norris to senior wide receiver Shawon Gardner in the second quarter. Gardner was wide open in the backfield and Norris hit him in stride. Gardner outran two Gator defenders and crossed the goal line for six points.
Head coach Jeff Littleton finished his first season as head coach for the Bearcats 5-6.
“We had to come in and start fast, playing against a number one team,” Littleton said about playing the Gators in their stadium. “We have a young team and hoped to get on them early. We came out at the beginning and made a few plays and first downs. But we just couldn’t finish off the drive. We lined up wrong a couple of times and missed some tackles on defense.”
The Bearcats went into the locker room 35-7 and were not able to score in the second half. Littleton said he was still proud of what his players worked for, both against Ware County and through the whole season.
“The main thing is that we fought to the end and never gave up,” Littleton said. “I’m just proud of the sacrifice and the effort they have given.
“They’ve come a long way this year. I feel like we got better and better all year long. There’s no quit in them, and that’s what I’m proud of.”
Sophomore Elijah Tyler rushed for 91 yards on 13 carries. This was Tyler’s first game playing as a running back.
“I was kind of nervous at first since it was my first time running,” Tyler said. “I guess I got over that once I got tackled.”
The Bearcats had four turnovers, giving the Gators good field position to score and continue to drive up the score.
Bainbridge wasn’t able to defend the run around the outside, but defended against the pass well.
The final game this season may have been played, but Littleton plans on working hard to get ready for next year.
“The season never stops,” Littleton said.