Seven brothers went off to WWII and all returned home safely 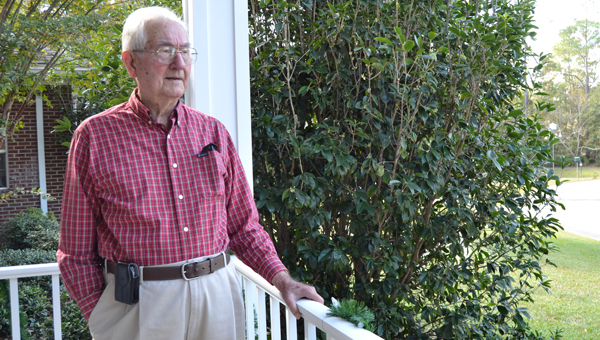 Curtis Hamilton said the fact he and all six brothers returned home from war was not by chance or good luck, but, perhaps, God’s plan. Hamilton now lives in Willow Ridge and has lived in Bainbridge since 1955. He worked for Englehard Corporation before he retired.

Curtis Hamilton must be lucky. His story is unlike many from those of World War II, where men fought and never came back home again.
If the men did return home, they were battered and bruised in every possible way.
Hamilton and six other brothers all volunteered, signed up for service and were spread across all theaters of the war and branches of the military. All seven of them returned home.
Hamilton said it wasn’t luck, “I reckon it was God’s plan.”
His mother was happy to see all seven boys return home. Hamilton had two other brothers that did not go into active duty and two sisters. There were 11 children total and his father passed away before the war in 1935 of a stroke.
The family lived in Aucilla, Fla. in Jefferson County just east of Tallahassee and once Hamilton’s father passed, “We just had to tough it out,” Hamilton said, adding that his family grew up poor and put food on the table from their small garden and several chickens.
One-by-one the boys in the family volunteered themselves for war and went off at different times from oldest to youngest.
First there was Royce, the oldest of the ones who went off to war. He was in the Army and was attached to a mobile Army hospital and he served in the European theater.
“He made a career out of the Army,” Hamilton said. Royce also went into the Korean War.
And next was Hilton Hamilton who joined up with the Marine Corp. and served in the Pacific — fighting in several key island invasions including Iwo Jima. The third brother Chester served in the Pacific in the field artillery and in the Solomon Islands.
There was A.D., or Andrew, who was in the Air Force and flew submarine patrol up and down the East Coast and Bill who was also in the Air Force. Bill was a waist gunner on a B-24 and flew out of North Africa and later out of England when Americans started to bomb Japan   heavily.
Curtis, who moved to Bainbridge in 1955 and worked at Englehard Corporation in Attapulgus for years, was the sixth brother to volunteer for the war. He never saw combat, but served in the Air Force out in the pacific. He was stationed in Hawaii and remembers the bomb being dropped on Hiroshima and celebration ensuing shortly after.
It wasn’t but several weeks later when Hamilton was back home in Aucilla and got to see his mother and other siblings.
Jack was the youngest, serving in the Air Force and he too never saw combat but flew out of North Africa.
“She was happy to see us all come home,” Hamilton said about his mother Christine. “I don’t know that she discouraged any of us to sign up for service. She knew what had to be done, had to be done.”
Hamilton wasn’t entirely close with all of his brothers due to large age gaps, but he and Chester both went to the University of Florida together thanks to the G.I. Bill that paid for their schooling.
Hamilton became an engineer and Chester got a law degree.
Today Hamilton lives in Willow Ridge, a retirement community run by Memorial Hospital and Manor.
Hamilton enjoys a cigar smoke out on the front porch, which has a view of a small pond full of fish and Mallard ducks. The place has oriental rugs and all-you-can-eat meatloaf — a scene far removed from Hamilton’s humble Aucilla upbringing.
“I just wish more people would observe Veteran’s Day,” Hamilton observed, like so many in his generation.”

One of the oldest Decatur County residents is ready…