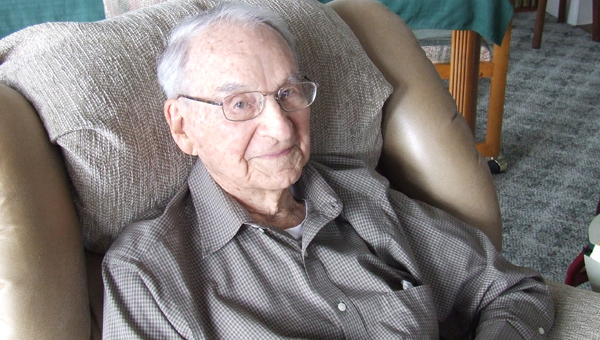 Decatur County resident Chester Smith is about to turn 104 and claims his secret to longevity is eating lots of ice cream. — Carolyn Iamon

Possibly the oldest man living in Decatur County, is Chester Smith who will be 104 on Dec. 1.
“Chet,”as he is known by family and friends, lives with his daughter Jane Merritt and her husband Lou, and alternates his time between their two homes at Lake Seminole and Tallahassee.
He came to live with them in February 2011 at the age of 101, relocating from his home in Palm Harbor, Fla., where he had continued to live independently following the death of his second wife.
He moved to Palm Harbor after retiring from 48 years with the YMCA, and he took up the game of golf, which he continued to play a couple times a week until he moved to Decatur County two years ago.
Mr. Smith was born Dec. 1, 1909 in Greensboro, N.C., graduated from High Point College (now High Point University), where he was president of his senior class of 1931. While in school he was active in sports, playing baseball, track and soccer and even coached the soccer team his junior and senior years.
He managed to work his way through college by living at home and working at the local YMCA, which had opened in 1924. He began working there in 1927,
That was the beginning of a YMCA career that spanned over 48 years. He served the YMCA in several southern, national and international YMCA boards, committees and associations as chairman, director, board member and president. He held positions in the Y’s of High Point and Kannapolis, N.C., Atlanta and in Danville and Richmond, Va., before he retired to Highland Lakes in Palm Harbor, Fla. in 1974.
He has always enjoyed gardening, attending community events and was active in St. Andrews Presbyterian Church Bible study group in Dunedin.
His daughter Jane said that in spite of his advanced age and having Alzheimers, he is a most pleasant and agreeable person with a great sense of humor, which he readily demonstrates. He often uses humor and wit to cover for not knowing the answer to questions asked of him. He enjoys visitors, especially when his grandchildren come. His grandson David Johnson and wife Jeanna often come to be with him when Jane and her husband have other obligations to attend to.
Although he has little short-term memory, he can still recite poetry he learned in high school.
He also has many memory aids as his entire life is chronicled in the many scrapbooks he has kept from very early years of his life. These include pictorial remembrances of trips to Europe and the US Western states.
He has always been an avid reader and had a great interest in the world of finance.  He continues to read Money Magazine, the Smithsonian, and National Geographic magazines, as well as the North Carolina Magazine from his home state.
He declares the secret to his longevity is simple — eating ice cream — and he doesn’t even care what flavor it is. He loves it all.