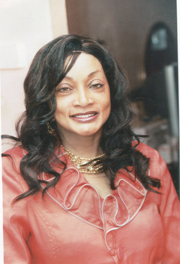 Karen Lavon Harris Washington, 54, of Bainbridge, was given her angel wings on Thursday, Oct. 31, 2013.
Funeral services will be held Saturday, Nov. 9, 2013 at 11 a.m. at St. John’s Church of God in Christ, 3490 Bainbridge Hwy., Quincy, with Minister Melba Washington officiating. Burial will follow at Jonas Lobe Cemetery.
Viewing will be at the church at 10 a.m., one hour before the services. The family will receive friends on Friday, Nov. 8 at Kay’s 101 Restaurant beginning at 3 p.m.
Karen was born Oct. 31, 1959 in Amsterdam, Ga. to the late Mr. Sam Harris Jr. and to Mrs. Joe Ellen Harris. She joined Smith Grove Missionary Baptist Church where she confessed Christ at an early age. During this time, she developed a strong love for gospel music—singing in the church choir and eventually forming a gospel group with her family, the Harris Family Singing Starlites. In 1977, she graduated from Bainbridge High School, and in 1980 she married Mr. David Alexander Washington, Sr., and bore three children during a 33-year marriage.
In 1983 Karen formed a new gospel group, the New Singing Stars. For many years thereafter, Karen and her group would travel throughout the country, singing the gospel of Jesus Christ. She touched many lives through her singing and love for Christ—hosting annual gospel anniversaries and holiday gospel marathons, producing 10 gospel music CDs and serving as a spiritual counselor to many people.  Karen was the founder and president of Community Helping Hands Outreach Ministry, a non-profit 501c organization solely dedicated to serving thousands of people throughout the surrounding community. She was also the founder of the All-State Annual Gospel Musical Marathon, an event that enabled her to give gifts and much love to the elderly and children during the Christmas season. In addition, she was co-owner of two family-owned businesses, Kay’s 101 Restaurant and Washington Rentals.
In addition to her father, she was preceded in death by one brother, Kenneth L. Harris.
Survivors include her husband, David of Bainbridge; three children, David Alexander Washigton Jr. of Bainbridge, Delanta Andriel Washington of Tallahassee, Fla. and Ms. DeMonica Alexandriel Washington of Bainbridge; one step-daughter, Lakissa Washington of Atlanta; six grandchildren, Jailyn, David III, McKenzie and Kayden, all of Bainbridge, and Ameria and Amani of Atlanta; one brother, Keith L. Harris (Delkeisha) of Attapulgus; one sister, Kristie L. Harris of Tallahassee; four special friends and confidants, Annie Graham (Mother Graham), Anita Wilson-Washington, Alisa Payne, and Miriam Williamson-Dickson; as well as a host of nieces, nephews, relatives and friends.
In lieu of flowers, memorial donations may be made to her charitable organization, Community Helping Hands, 510 E. Pine St., Bainbridge GA. 39819.
Bruton Mortuary is in charge.