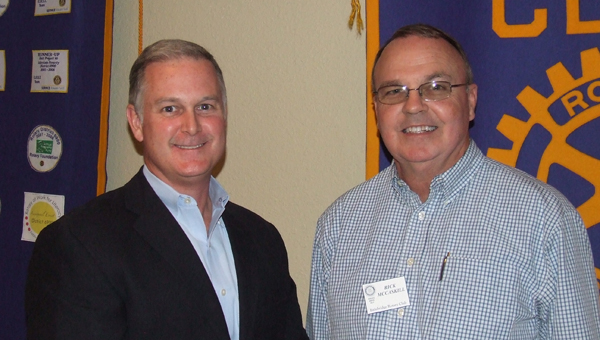 Dave Geraci (left) stands next to Rick McCaskill during the Rotary meeting Monday. According to Geraci, short-line railroads could provide economic benefits in the Decatur County community.

Dave Geraci, director of marketing and sales for the short line railroad, Genesee & Wyoming Inc., which serves the Decatur County Industrial Park, informed Bainbridge Rotarians this week about the economic benefits of having short-line rail service available for industrial and agricultural cargo transport in this area.
More specifically, he wanted to make local businesses aware that direct access is available for them to the Port of Panama City, Fla., by way of the short line and its connections to the first class rail lines of CSX and Norfolk Southern.
Genesee & Wyoming first began in 1899 as a 14-mile-rail line in upstate New York, basically used to haul salt in that region for use on the roads in winter. That line is still operational today, and from that beginning the company has grown to be the largest operator of short line railroads and regional freight rail lines in the world.
GW operates in nine regions in the United States, as well as Canada, Australia and some European countries. It is $5.5 billion dollar corporation that operates 111 railroads, 19 of them in the Southeastern region of the United States.
In this region the group of short line railroads serves 234 miles through 13 counties.
Geraci said they are serving several companies in Bainbridge and Decatur County, hauling primarily aggregates and industrial commodities.
The direct access to the Panama City port can open up business opportunities for companies and agriculture in this area to ship their products world-wide.
Rick McCaskill, executive director of the Bainbridge-Decatur County Development Authority, who introduced Geraci, added that he has worked with Genesee Wyoming extensively. He said a lot more people (companies) are looking at us as a location from which to ship their by-products, such as peanut shells. He added he is currently working with a company looking to locate here and build a loading facility to handle grains and other agricultural products.
Geraci added that the Port of St. Joe is also in the process of being reactivated to handle the many loads of wood pallets coming from a company in Cuthbert.
“Railroads tend to be an economic indicator, and we are all up,” said Geraci, who added, “That is a good sign.”

BSC study aboard programs have ticket to see the…