Results are in: Sweet wins in only opposed race for city council 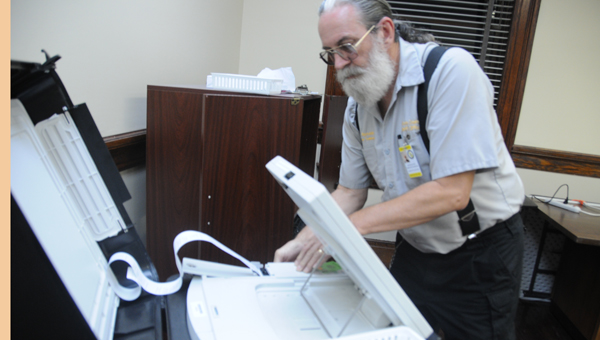 County computer technician Roy Reynolds runs the ballot numbers through a machine at the courthouse Tuesday night, after all precincts reported in.

The election Tuesday for the City of Bainbridge saw one of the worst voter turnouts election officials have seen in years.

Voter turnout after unofficial results came in Tuesday night at 8 p.m. showed that only 2.92 percent of those registered in the districts holding races came out to vote.

In the only race with opposition — Alderman Post 2 District A — incumbent Joe Sweet won against opponent Richard A. Mosley II with 85.59 percent of the votes.

“I want to thank all of those who supported me and all of my family and friends for doing the best they can to support me,” Sweet said after the final vote was run through the machine. “I am going to do all that I can to satisfy Bainbridge and Decatur County.”

Mayor Edward Reynolds, Councilwoman Glennie Cox Bench, and Councilman Phil Long all ran unopposed. Unofficial results show there were no write-in votes in any of these three races, and each of these candidates won with 100 percent of the vote.

Reynolds received a total of 154 votes, Bench received 137 and Long had 51 total votes.

In addition to mail-in ballots there were four polling locations including the coliseum, West Bainbridge, Mt. Pleasant and the fairgrounds.

Of those locations, most received between 20 and 60 voters, however Mt. Pleasant only saw two ballots cast all day.

Poll officials Bobby Davis and Danny Harrell said of the 30 years they have worked at that location, this election saw one of the worst turnouts in its history.

“We just had a ball,” Davis said. “We sat and discussed every single person we had ever known in our lives.”

Davis joked that another poll worker used her grandsons coloring book and colored in every page with a blue ink pen to fight the boredom.

“This is near about the worst (turnout) we have seen here,” Harrell added, who passed the boredom by watching the firehouse flag blow in the wind, he said.

But White said despite the voting turnout of 2.9, she encourages voters to come out in March for primary elections. Three Decatur County Commissioners, multiple state officials and three Decatur County School Board positions will be on the ballot.