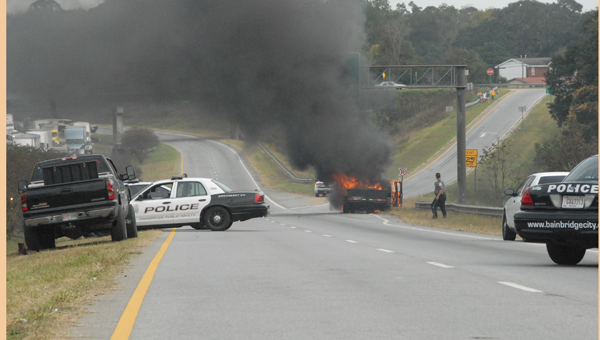 Lanes closed during Halloween traffic Thursday due to a truck catching fire and causing a small explosion. Fire officials were on scene but ran out of water while putting out the flames. No one was injured. Powell Cobb

Police responded to a call at 4 p.m. Thursday of a truck in flames on Georgia Highway 84 in front of the Faceville exit.
When Bainbridge Public Safety arrived at the scene, the driver and passengers of the truck were standing safely away from the burning vehicle.
“We were just coming over the bridge when I looked in the rear view mirror and saw flames busting up through the bed of the truck,” said driver Shannon Stephens. He and two other coworkers operate a pavement painting business and were on their way home to Valdosta when the fire began.
Officers began directing traffic on the same side of the road to cross the median and make their way back toward Shotwell Street. 18-wheelers were forced to remain parked on the highway.
A trailer was attached to the truck holding three 5-gallon gasoline tanks and a 20-pound propane tank. When Stephens informed officers of the highly explosive contents, officers began clearing space and directing traffic farther away from the scene.
“At that point, we started moving traffic back to a safer distance and started to fight the fire with the water gun off the top of the truck,” BPS Director Eric Miller said.
Having no fire hydrants on the highway, BPS used the water they had and called the Decatur County Fire and Rescue Department for extra help.
The fire began to spread to nearby brush going down the hill and the propane tank let off a minor explosion. Finally, the county’s tanker arrived and was able to provide plenty of water to put the fire out.
A team of firemen controlled the bigger flames, allowing another team to get close to the truck and put out the source of the fire.
“If all the tanks were to start exploding, we’d get everybody back as far as we can and clear the area,” said BPS Major Robert Humphrey. “If they explode, then let them explode. We’ll deal with it after that.”
For Humphrey, the biggest challenge of the situation was the explosion of the pressurized propane tank.
He said it was difficult to predict what might happen and how the fire would affect the tanks.
Decatur County and BPS were able to exterminate the flames and control the fire from spreading into other dangerous areas. Nobody was injured on the scene.