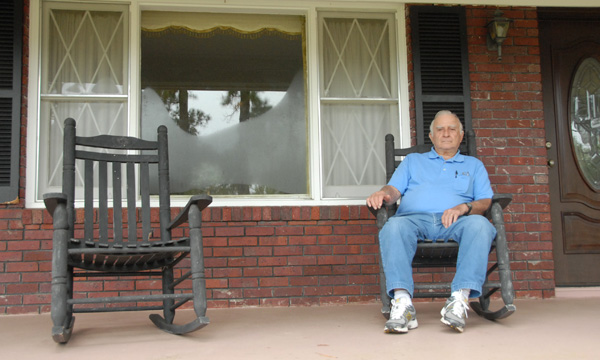 Kendrick relaxes on the front porch of the home he built in Climax over 40 years ago. Right, a mother cow nurses her calf on the land behind Kendrick’s house.– Powell Cobb

His country neighborhood out on Open Pond Road in Climax hasn’t changed a lot since he moved there in 1933. Most of his neighbors are the same families that have lived in the area for decades. But even still, he’s seen people come and go. Two men have become attorneys and another two are now doctors. There’s a retired air force general living down the road.
Then there was J.B. Kendrick, the youngest of five, growing crops and raising livestock on his father’s land.
“I’d say quite a few professional people have come out of this area,” Kendrick said. “Me, I feel really independent for what I’ve come up through. I guess I’ve done okay.”
His peers consider Kendrick a humble man. Of course he wasn’t expecting a phone call from the Georgia Farm Insurance Bureau announcing his nomination for 2013 Ag Man of the Year in Decatur County.
“I’m really surprised that I was chosen,” Kendrick said. “It’s an honor, but I’m just really surprised.”
Georgia Farm Bureau Insurance agent Bo Jones felt differently.
“I nominated him because he is a lifetime farmer,” Jones said. “He’s a low profile man that has devoted his life to his profession. He’s still active, too.”
Retiring in 1998, the 86-year-old man can’t quite remove himself completely from the past 50 years worth of work he’s put in. His current project is reforesting his hundreds of acres of land that have become overgrown, wrecked from weather and lack of maintenance. Kendrick wants to replant pine trees to make things look like they did when he first started farming for himself in 1949.
“That’s the year I went and bought me a Super C Farmall tractor,” Kendrick said proudly. His other option was to use mules. “I don’t think I had ever even driven a tractor. It was hard to get them at that time. It wasn’t long after the war and farming equipment was slow getting here.”
“The war” was World War II. Kendrick had passed a physical to be drafted in Atlanta just four years earlier, but the draft board gave him a six-month deferment because he was helping his father on the farm.
“I knew quite a few guys in this area that went and didn’t come back,” Kendrick said. “It was rough. You could hear nothing but bad news.”

Kendrick relaxes on the front porch of the home he built in Climax over 40 years ago. Right, a mother cow nurses her calf on the land behind Kendrick’s house.– Powell Cobb

The war ended before he was shipped overseas. All of his attention turned to the farm.
Kendrick calls what happened from then on somewhat of a success. His wife, Anita, was a few years younger than him, but the two had grown up together.  When she graduated high school, Anita moved to Atlanta to attend business school. Every so often she would take a weekend to ride a bus down to her home in Camilla. Kendrick would be there to meet her.
“That went on for two or three years, and finally we decided we ought to get married and do something,” Kendrick said, laughing.
They married in 1957. Anita became Kendrick’s office secretary, working with the numbers and keeping records for her husband’s farm yields. By that point, the farm was in full swing. He was growing peanuts, cotton, corn and soybeans. His land was covered with cattle and hogs, his major sources of income.
Days were long as Kendrick worked from sunrise to sundown. The job demanded physical strain and backbreaking work. But Kendrick didn’t rely on tobacco or alcohol to curb the stress. Nothing could refresh him more than a glass of iced tea at lunch.
His neighbor, Melvin Smart, grew up on the land and began working with him as an assistant. He stayed until the day Kendrick retired. He still lives next door.
Now, Kendrick leases out his land. He even decided to sell his cattle, eventually. Fully out of the farming business, he watches the industry grow.
“I look back at the changes that have been made since the little two-row tractors,” Kendrick said. “If I had anything to say to the younger farmers, I’d give credit to them because they’re making bigger yields than we ever thought about making.”
Kendrick realizes that today’s farmers are different from the farmers of his own day and age. Education and experience are going hand-in-hand, whereas back then all you needed was, “a strong back and a weak mind,” he said.
Looking back, Kendrick can’t decide on what he liked or disliked most about his career as a farmer.
“I enjoyed working with livestock, but for me, working on a farm was more of a necessity than anything back then,” he said, laughing. “That was my cash flow.”