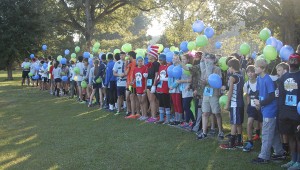 It was a cool fall morning last Saturday at Springhill Farms, where just under a hundred runners approached the starting line for the annual Epic 5K race. Each of them held a balloon and released them together to honor Dylan Faircloth, a Bainbridge cross-country runner who died in a car crash in September 2010.

Farm owner and race host Dan Provence let a pumpkin fly in his custom-built trebuchet. The second it splattered on the ground, the race was off.

In the crowd of runners was former Georgia Tech quarterback Stan Gann, who’s own heart was failing him the same time Faircloth was killed. Roughly 48 hours later, Faircloth’s heart was beating inside Gann’s chest.

“I feel a real close to connection to Dylan,” Gann said. “I pray for him every night. He blessed us. It’s kind of hard to fathom all of this that has happened, spiritually and mentally.”

Gann, 74, makes his way back to the Epic 5K every year to honor Dylan and the incredible gift he was given.

“It’s really more heart than I can handle,” Gann said. “The nurse told me that I’ve got a good pump, but the pipes are a little rusty.”

Crossing the finish in first place was Chase Harris at 18:03. Harris, 16, said that this was one of his slower races because of how difficult the course is.

“This was the hardest one I’ve run all year, actually,” Harris said. “It’s about two minutes off my (personal record). It was pretty hilly. If you had to go up, then you had to go down. I ran in my flats because I didn’t want to use spikes, which made it pretty tough.”

Paige Braswell clocked in at 20:13, the first girl to finish the race.

Gann walked the two-mile route, saying he was fighting age as well as trying to keep in shape.

“Going out is pretty good, but coming back is a little rough,” he said. “I’m what you call a “wogger.” I walk a little bit and jog a little bit.”