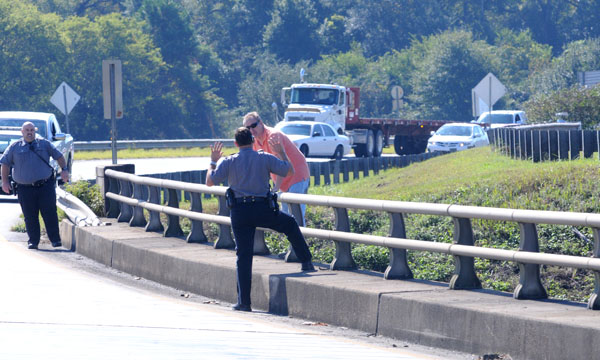 Police communicate with a man who was attempting to jump off of the Marvin Griffin Bypass at noon Monday. — Ashley Johnson

Bainbridge Public Safety responded to a call Monday at 12:05 p.m. for a man who looked like he was going to jump from the Marvin Griffin Bypass bridge onto Shotwell Street.
A man later identified as James Joy was standing on the outer railing facing East before switching sides to lean off the western railing. By then, police had made their way toward Joy to encourage him to climb back over to safety. Below, Decatur County deputies were controlling traffic and personnel stood by prepared.
BPS Captain Jack Bunting made contact with Joy and prayed that he wouldn’t take a wrong step off the ledge.
“My biggest fear was that he would slip,” Bunting said.
Joy told officers he was a veteran and was having personal issues. He admitted he was dealing with post-mental stress disorder. He explained to Bunting while he teetered on the bridge’s edge that he had called the Department of Veterans Affairs multiple times for help, but it didn’t get him anywhere.
Bunting used the military angle to try and convince Joy to step back over the railing.
“I served in the military, too, so we got on that feel with him,” Bunting said. “I told him that we were both brothers-in-arms.”
After calming down, Joy refused to cooperate with BPS until he was promised he wouldn’t go to jail.
“He was afraid of jail because he’s currently on probation,” Bunting said. “We assured him that he wouldn’t go to jail, but to a hospital for help.”
Joy climbed back over the outside railing onto the road and was immediately escorted to Memorial Hospital.
“He’s at the ER now,” BPS Director Eric Miller said Monday following the incident. “They’re making sure there are no medical issues.”
No charges were made against Joy.