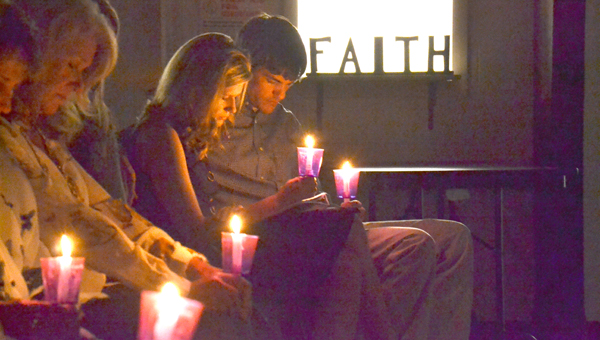 Bainbridge residents gathered Thursday night to pray, tell stories of hope and spread awareness about domestic violence with a candlelight vigil.
The Decatur County Citizens Against Domestic Violence organization holds the vigil each year to share with others that October isn’t all about pink and breast cancer, but also about purple — the color of domestic violence awareness.
Captain Liz Croley with the Decatur County Sheriff’s Department is often the officer in the community that deals with violent homes first. Croley said one in four women have, or will, experience domestic violence in their lives. Every nine seconds a woman is abused. Four women a day are beaten to death. Nearly 90 percent of the children that live in violent homes witness the domestic violence.
“On Dec. 5, 2009 Decatur County was affected by domestic violence,” Croley said. “Someone’s daughter, sister and mother were killed, along with her seven-year-old son.”
Croley said Tonya Swords and her son Cam Reynolds were killed in their home at the hands of the man who abused them, who then turned the gun on himself. Five days prior, Croley said, Tonya had contacted law enforcement, where she stated there was domestic violence in her home.
“She said the last five years were better than the previous years, because there son was born and things had slowed down a bit,” Corley said. “He idolized their son because he was his but he shunned her and her other two daughters though.”
She had two daughters and a son and they were relocated by law enforcement to a safer place. Two days later she allowed herself to be drawn back in and went with the intention to talk and visit.
“At 8 p.m. law enforcement received a call about a possible murder-suicide,” Croley said. “Domestic violence is a social problem that affects all of our lives. Preventative education is the first step to ending violence. It’s not a private family matter and should be responded to as a crime by law enforcement.”
The organization then read the names of those who lost their lives in Georgia in the last year to domestic violence.