Where Bainbridge State is headed in the future

By Carol Heard
Special to The Post-Searchlight

If planning for the future is difficult, try planning five years out in an ever-changing technological environment, particularly for an audience tagged the iPad Generation.
Potential changes in how current and future generations will obtain higher education are at the crux of the quandary today’s higher education administrators are facing. For example, there are the massively open online courses (MOOCs). To help drive the point home, members of today’s iPad Generation can take a driving education course … on their smartphones.
So just as administrators are polishing their crystal ball on what the future holds, that crystal ball just becomes more muddled as technology meets the measured world of academia.
As Bainbridge State President Richard Carvajal said, “It’s supposed to be messy.”
The development of the five-year strategic plan will be deliberative, and it will be marked with lots of discussions and some soul searching. So as Bainbridge State College marks its 40th anniversary, what will it be like in another 40 years, 10 years or just five years?
“We are going to spend the next year really talking about where we want this institution to be by the end of the decade as we respond to what all is changing around us in the world of higher education,” Dr. Carvajal said. “If we believe, as the expects tell us, that the next five years will be the most transformative period we have seen in the last half century, then this is necessary work. We are not going to bury our heads in the sand and wait and see what comes at us. We are going to get ahead of this and really think about how do we thrive in this new world.”
Bainbridge State has proven it can adapt and develop important niches, such as having a vibrant vocational school that now makes this College unique among the other 30 University System of Georgia institutions.
Another characteristic that has been chiseled into this College’s core is the relationships it has between its faculty and staff and its students.
Classrooms and how content is delivered may be different in five years, but the emphasis on caring that exists now at the College should not change.
Dr. Carvajal said the College needs to use its strategic plan, not as a checklist of things accomplished in five years, but as a guide that serves as a compass ensuring the College is staying on a course of excellence.
“What is interesting is that when you look at the history of colleges with a mission focused on access, what was their fundamental strength for most of their history was their ability to change and adapt quickly. Unfortunately, that strength mostly went away in the last 10 years,” Dr. Carvajal said. “We are going to have to go back and re-find that strength and to re-find that ability to be adaptive and move quickly.”
State Sen. Dean Burke concurred when asked what he thought needed to be in the strategic plan.
“The most important thing to me is flexibility,” Sen. Burke said. “Right now, the training for our workforce is a huge deal, but we do not know what those needs are with any kind of advance time. … Being nimble is a big deal.”
In addition, training for a workforce today goes beyond what some may consider the learning of a skills set, but also a leadership tract that baccalaureate and more advance degrees demand.
Board of Regents member Doreen Poitevint said MOOCs could profoundly change higher education.
“We must help shape this change to ensure we continue to put students first. That is what it’s all about, putting students first,” Poitevint said. “I just don’t see anything replacing the interaction between a professor and a student in the classroom. But the technology is there, and how we use it and how it evolves is really going to be amazing to watch. It needs to be done smartly.”
Both Sen. Burke and Regent Poitevint said MOOCs offer an alternative while at the same time trying to keep in check the escalating cost of higher education and realization of shrinking state support. For example, the state support for the University System of Georgia has dropped from $2.3 billion in fiscal year 2009 to about $1.7 billion today, Poitevint said.
In August, the Board of Regents of the University System of Georgia adopted a strategic plan that acknowledges this new environment. Of course one of the cornerstones of the plan is the System’s and Gov. Nathan Deal’s Complete College Georgia initiative, which has a goal of increasing by 2020 the percentage of Georgians completing college from 42 to 60 percent.
One action step under the plan calls for controlling overall costs to students by developing new affordable degree options and strengthening a cost effective, access tier for college. Another step is for the System to manage its current physical space more effectively, build fewer new buildings and invest in repurposing current facilities to serve the needs of modern students.
One of the capital projects that Bainbridge State had been seeking is a new academic building, but unfortunately, that project could not be funded this year.
Sen. Burke, who, along with other local legislators, was credited with securing $3 million during the last session for the expansion of the College’s River Birch Hall, is very hopeful it can be added in the near future.
“It is necessary, maybe we have to wait a year longer than we were hoping,” Sen. Burke said. 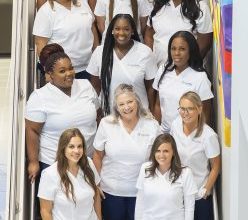