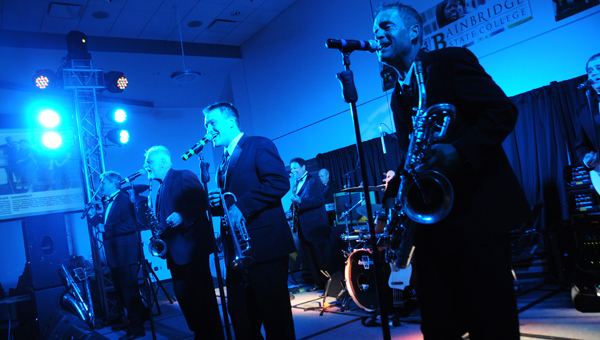 The Swingin Medallions bust out moves and get those at the BSC 40th Anniversary Gala dancing with their stunts and groovy tunes. The band is based out of Greenwood, S.C. — Ashley Johnson

Lights bounced off the walls and saxophones howled Saturday night, as Bainbridge State College hosted its 40th anniversary gala. People from Bainbridge and other surrounding communities met at the Kirbo Center for an evening of socializing, dancing and auctions to fund a Founders Scholarship for the college.
“The event went fabulously well,” said Dale Fuller, executive director of institutional advancement at Bainbridge State College. “Everyone young and old was having fun.”
Entertainment was provided by the Swingin’ Medallions, an American beach music group with a shifting cast, nicknamed “The Party Band of the South.” They brought classic oldies tunes to life for everyone to dance to and enjoy.
Tables filled the banquet hall where people could sit and enjoy plenty of catered food from a number of community chefs and restaurants or sip on a drink from the bar. A television outside the hall broadcasted college football games for those looking for a quick sports break.
“The football television was popular and all the food was gone by the end of the night,” said Fuller.
Two separate auctions were held to help fund the scholarship. Items up for auction included a UGA signed football and wreath, bottles of wine and a grill. Dr. Carvajal was the auctioneer.
“Simply put, we could not have done this event without the amazing support of all our great sponsors, the many volunteers who put in long hours to make sure every detail was perfect and, of course, everyone who bought a ticket and attended,” BSC President Richard Carvajal said. “It was truly a special night in the life of our college, and all of us at Bainbridge State are grateful that we are in such a supportive region.”
All proceeds of the event went to establishing a Founders Scholarship for the school. Money from sponsors, ticket and auction buyers went towards creating the $15,000 scholarship. Carvajal announced the gala’s proceeds have more than funded the scholarship, which will be awarded next year to a deserving student.
Representatives from 17 surrounding communities made an appearance at the gala. The increased exposure is exactly what BSC wants, as people get to experience the campus and buildings the school has to offer.
Fuller was excited that so many new people got to visit BSC for the first time Saturday.
“I loved that we were able to recognize all of the faculty, staff and community leaders, both past and present, who have helped make us the college that we are today,” Carvajal said.
The Founders Scholarship not only recognizes those who started the institution, it provides an opportunity for citizens to go to college who may not have the means to do so otherwise.
“Two of our biggest goals is to get people on our campus and provide a scholarship for students,” Fuller said. “We were able to do both on Saturday.”