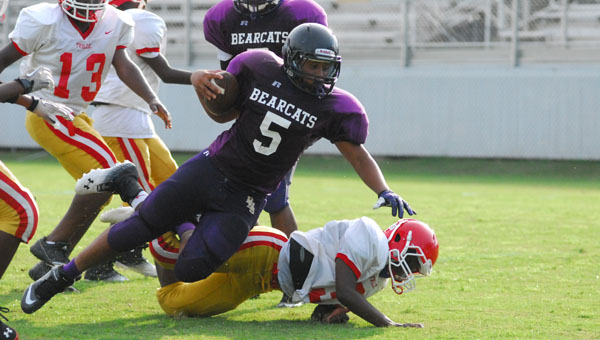 Bearcats running back Tré Storey pushes into the endzone.

Using an arsenal of strong running backs and laying down a tough defense, Coach Heith Maxwell and his eighth grade Bearcats bulldozed over the Douglas Middle School Bulldogs 46-12 Thursday night at Centennial Field, climbing to 5-0 for the season.
“The boys have been working hard and it was a chance for the backups to get a lot of playing time,” said Maxwell. “I was happy about that.”
Running back Markel Broadnax returned the opening kickoff for 51-yards, setting up running back Damion Pierce’s touchdown only 22 seconds into the game.
Shutting down the Bulldogs during their next drive, the Bearcats marched right back into Douglas’ territory to score on a short pass from quarterback Caleb Boutwell to wide receiver Travis Campbell.
Scoring three more times but failing on a two-point conversion in the second quarter, Bainbridge entered the locker room up 38-0 at halftime.
The Bearcat defense allowed only two touchdowns and a 2-point conversion in the second half, adding one more touchdown and two-point conversion of their own to the score in the third quarter.
“We played hard and we did great,” said Boutwell. “Our defense did really well.”
Defensive coach Patrick Clark was proud of the stout performance from his players.
“Defense did an excellent job,” said Clark. “We pursued the ball, everybody stayed in their lane, and it was a good team effort. We need to work on blocking schemes and tackling and making sure we wrap up, and just continue to hustle and find the football.”
In two weeks, the Bearcats host the Washington Middle School Tigers at Centennial Field. Though Maxwell feels confident in his players, he’s concentrating on getting his team prepared.
“We played them a couple weeks ago, and it was a pretty overwhelming win, but we made a few mistakes,” said Maxwell. “This time we want to have a mistake-free game.”
The Bearcats face off against the Tigers Thursday, Oct. 17 at 5 p.m.