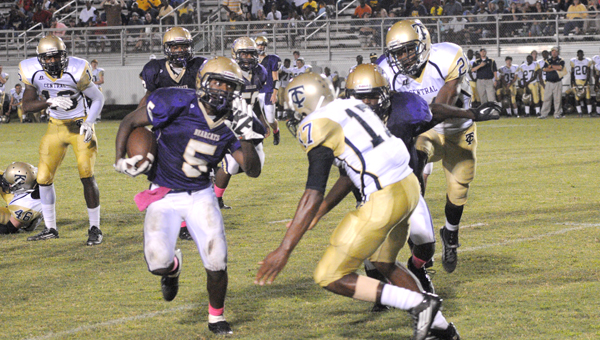 Centennial Field rocked and swayed last night as the Bainbridge Bearcats hosted Thomas County Central, but a defensive struggle from Bainbridge in the second half lead the Yellowjackets to a 50-23 victory.
Quarterback Preston Norris was 5-12 passing for 197 yards, making momentum-swaying completions to brothers Craig and Greg Cooper.
“We just came out really motivated,” said Norris. “We played great, and we just have to keep it up.”
The Bearcats busted out of the gates strongly, taking advantage of a bad punt snap by the Yellowjackets in the first quarter and kicking a field goal to put the score at 3-0.
Another turnover by the Yellowjackets in the next series gave Bainbridge the ball on their opponent’s 47-yard line, but they fumbled the ball the very next play. Thomas County responded with their third fumble of the night, and Bainbridge pushed down the field to score and put up another seven points on the scoreboard with 9:06 left in the second half.
The Yellowjackets came through with their own touchdown, putting the score at 10-7.
Craig Cooper rushed for 158 yards, plowing down the field to score the Bearcat’s first touchdown, while Greg’s hands were catching almost everything thrown his way, catching a 91-yard touchdown pass and raising the score to 17-7.
Thomas County responded once again and added another touchdown to the scoreboard. The Bearcats fought for one more field goal and entered the locker room with the score 20-14.
“Our kids come out inspired to play,” said head coach Jeff Littleton. “We had a really good two weeks practice and we really built on the mistakes that we made at Westlake. Last week we had the best practice days that we’ve had all year, and it showed in the first half.”
The Bearcats emerged from the locker room ready to continue with their momentum, but immediately faced two back-to-back touchdown drives from the Yellowjackets. Craig Cooper responded with a 71-yard kickoff return that got the fans on their feet, but ultimately the Bearcats had to settle with a field goal, putting the score at 28-23 with Thomas County still in the lead.
“We ran the ball pretty good, but there’s still some stuff we’ve got to work on,” said Greg Cooper. “Making a better pocket, keeping from fumbling, it’s a lot of stuff we’ve got to correct on offense.”
The Yellowjackets continued to maneuver through Bainbridge’s defense, scoring off a blocked punt and taking advantage of a bad punt snap to rake in a safety. Thomas County score three more times in the second half, and the final buzzer sounded with the Bearcats losing 50-23.
“We just couldn’t keep the pressure on in the second half, but we played hard,” said Littleton.
The Bearcats gave it their all until the final whistle and didn’t let the scoreboard discourage them from playing tough.
“We’re just going to work on our fundamentals and improving blocking and tackling, that’s what it’s going to take,” said Littleton.
The Bearcats host Harris County next week at Centennial Field. The game will kick off at 8 p.m.