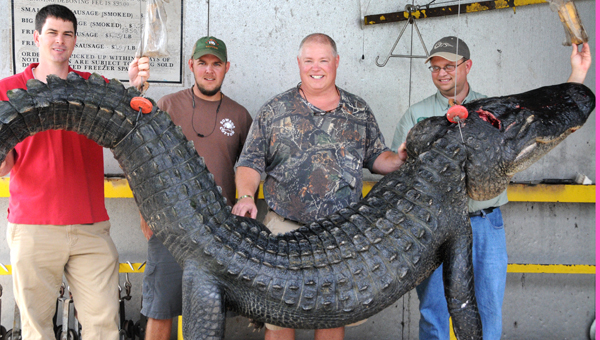 A team of four harvested a state record gator out of Lake Seminole late Wednesday night, and Thursday weighed in with the Department of Natural Resource game wardens, who declared the reptile capture an official state record.
Measuring at 13 feet and 10 3/4 inches and 620 pounds, the team struggled with the gator during the hunt — wrestling, working, leaving their boat covered in moss and debris, their arms sore and a harpoon snapped in half thanks to the monster’s jaw. The gator beats the previous state record alligator that measured 13’9 inches.
Jim Overman, Gary Braswell, Dr. Daniel White and Alex Harrell were the four Bainbridge men that brought in the record gator.
They spotted it near Sealy’s Landing in about nine feet of water, several feet from a bank. They estimate, because of its weight and size, that it is more than 50 years old.
Overman who shot the gator once it was attached to a line, said he plans to use all of the meat for food and then have it stuffed for educational display either to go on tour around Bass Pro Shops around the state or for some type of aquarium to use for display.
“We are going to harvest every bit of edible meat from him we will have it for fried gator and stir fry gator and maybe even make some alligator smoked sausage,” Overman said. “I’ve actually already been in contact with Bass Pro Shops to mount the skin so he can be on public display. If that doesn’t work out maybe we can find someone else like an aquarium that could display it for educational purposes — we would be happy to make that happen.
Alex Harrell and Daniel White were scouting the river for duck hunting locations, when they saw the alligator that they have thought about nicknaming “Snaggletooth” for its lack of teeth or “King Gator.”
Harrell and White called Braswell and Braswell called Overman, who had the licensed tag for the hunt, to join them. They took two boats and got on each side of the gator.
“Alex drove up on one side and shot him with bow and arrow,” Braswell said, who tried to harpoon him, but the harpoon snapped in half when the gator bit down on it.
“I started pulling [the alligator] toward the boat and he started swimming towards us. I told Jim, ‘shoot now and try to stop him.’ He was right there at us and wasn’t afraid of us at all.”
Overman had waited for several years to finally get a permit to hunt one of this size.
“You are usually turned down a few times before you are granted a permit,” Overman said. “I was turned down four times before I got one.”
“When you get a gator in your sight and attempt to finish him off, he is always very aggressive and this one did not disappoint. That is just his nature.  It is a thrill to ultimately finish the job. “
According to the Georgia Department of Natural Resources’ Wildlife Resources Division, the 13-foot, 10 ¾-inch gator beats the former record by 1 ¾ inches. The record was previously held by Randy Hand, who harvested his 13-foot, 9-inch gator on Sept. 19, 2010, in Decatur County.
“For those fortunate enough to be selected to participate in our alligator hunting season, it truly is a fantastic experience,” says Dan Forster, director for the Wildlife Resources Division. “It’s extremely exciting to know that a state record alligator was harvested at Lake Seminole, and we extend our congratulations to Mr. Overman.
“For hunters looking for a thrilling and one-of-a-kind hunting opportunity, I certainly recommend applying for this hunt.”

Medley named Coordinator of the Year for Special Olympics