Medley named Coordinator of the Year for Special Olympics 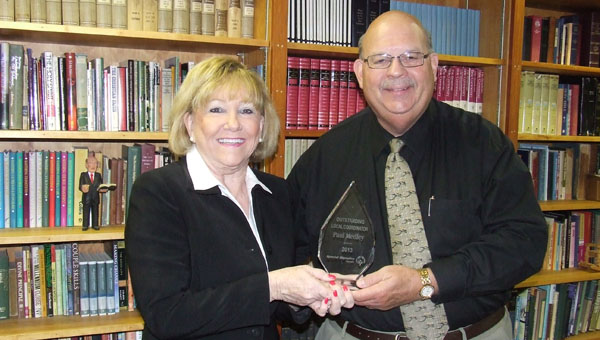 Pat Harrell and the Rev. Paul Medley display the plaque presented to Medley for being named the Special Olympics Coordinator of the Year for the State of Georgia.

The Rev. Paul Medley was recently named Georgia’s Special Olympics Coordinator of the Year. The presentation was made in late August at an event in Warner Robins.
Rev. Medley was nominated by Pat Harrell, current chair of the Decatur County Special Olympics Team, who called Medley “the heart and soul” of the local Special Olympics. “Without Paul Medley’s vision and leadership, none of this would have happened,” Harrell wrote in her letter of nomination. She referenced the way the local committee was organized and accredited, all because of his vision and leadership.
The Medley family moved to Bainbridge from Tennessee when Rev. Medley accepted the pastorate of First Baptist Church in Bainbridge. He soon realized there was no Special Olympics Committee here and he set out to remedy the situation.
The Medleys have a special needs daughter Emily, and she, as well as the whole family, had been involved in Special Olympics activities in Tennessee for many years.
The first person Medley contacted to help him out was Jim Beck, who was retired from the Human Resources Department of Amoco. They began putting a steering committee together.
One of the first persons Beck thought of was Pat Harrell, retired from 31 years with the Decatur County Schools where she served first as a teacher, then a counselor, and as a special education director.
The three worked to recruit additional team members and volunteers and started the process of gaining accreditation., a process that took approximately one year. In order to be fully accredited it is required that all team members and volunteers be trained, that there are specific sanctioned Special Olympics events offered. It is also necessary and that financial backing be in place. The local chapter is now fully state and nationally accredited.
The sanctioned events offered locally have been the Special Olympics bowling for both youth and adults, and the spring track meet. A popular event with attendees, although not specifically sanctioned, is the Snow Flake Ball held each February.
It gives the community’s special needs persons a chance to experience a prom atmosphere, complete with ball gowns, dancing, refreshments and even limousine service for some.
A new project that is currently underway is the Young Athletes Program for those under the age of 8. It meets regularly at Potter Street Elementary School with the goal of training youth in the skills needed to compete in the sporting activities later on. The fun is not so much in the winning as it is in playing the game. As the national motto states, “Let me win, but if I cannot win, let me be brave in the attempt.”
The track and field events have been expanded to include persons from Miller, Grady and Seminole Counties.
Special Olympics have made a big difference in the lives of those with special needs. Medley said it gives them a chance to socially interact with their peers and with other volunteers. It is a way to express themselves, and a chance for those who volunteer and serve in other ways and be cheerleaders for the participants.”
Harrell and Medley both stated that Special Olympics events are open to anyone with an intellectual disability. They are not required to be enrolled in school or attending the Decatur-Seminole Training Center.
Medley added that they are always looking for people with the heart to serve on the leadership team or learn to be a volunteer.
Current team members are: Sarah Dollar, Janie Kelley, Krystal Hiers, Kristi Gilley, Catherine Gossett, Sylena Wiggins, Jim Holton and Jim Beck.