Bearcats make second shut out of the season 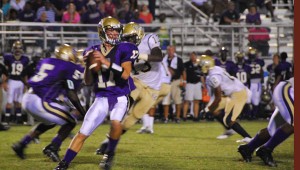 The Bainbridge Bearcats used several big plays and a stingy defense to shut out the Bobcats of Early County 26-0 at Centennial Field Friday night. Bainbridge improved to 2-1 on the season, while Early County dropped to 1-2.
Mid-way through the second quarter, the Bearcats scored on a nice 74-yard pass from senior quarterback Preston Norris to senior receiver Shuwon Gardner. The PAT was no good and with 6:13 left in the second quarter, Bainbridge led 6-0.
Bainbridge received the opening kick-off of the second half and put together a nice drive but was forced to punt from Early County’s forty-yard line. After holding Early County on a three and out series, a bad snap on the punt gave the Bearcats first and goal from Early County’s eight-yard line.
After losing a yard on first down, Bainbridge running back Aaron Calloway ran nine yards for the score to lengthen the Bearcats’ lead to 13-0 with 3:32 left in the third quarter.
On Early County’s next offensive series and facing third and four at Bainbridge’s 31-yard line, Gardner came up big again with an interception, ending the Bobcats’ drive.
Late in the fourth quarter, with 31 seconds left in the game, Calloway, who finished with 63 rushing yards on 18 carries, found the end zone for the second time on a 12-yard run. With the good point after attempt, the Bearcats had an insurmountable lead of 20-0.
With Early County trying to get on the board with seconds left in the game, Bainbridge’s Craig Cooper intercepted a Bobcat pass and scored on a 44-yard return as time expired, making the final score 26-0.
At the beginning of the game, it appeared that Bainbridge had no answer for Early County’s offense. After taking the opening kick-off, the Bobcats put together a lumbering 15 play series and had the ball as deep as the Bearcat 12-yard line. But, Bainbridge’s defense came up big on a fourth and eight play that ended Early County’s drive.
“They came out in something different that what they have been showing on film and they had us on our heels a little bit, not only on that drive, but the entire first half,” said Bainbridge head coach Jeff Littleton.
“Our philosophy on defense is bend, but don’t break. In the first half, we were sure doing a lot of bending. But the players made adjustments, the coaches made adjustments, and we kept them out of the end zone,” Littleton continued.
Bainbridge’s defense has only given up six points on the season and has posted two shutouts in the first three games.
Next Friday night, the Bearcats travel to Atlanta to take on Westlake High School. Kick off is scheduled for 7:30 p.m.

A bit of north Louisiana came to Bainbridge Sunday night as Jase and Missy Robertson, of the A&E television show... read more