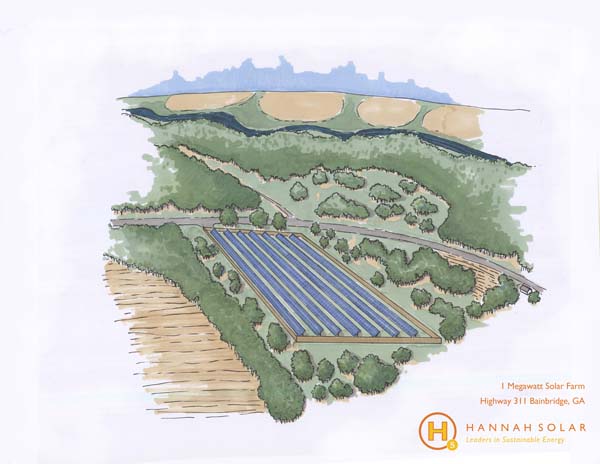 Hannah Solar, LLC has spent the early weeks of August planting the foundation for the first of many solar farms in Southwest Georgia.

The proposed solar farm is 1 megawatt in size consisting of 3,360 solar panels and will grow in a large, vacant field off Georgia Highway 311 just north of Bainbridge.

Hannah Solar purchased five acres from local residents and is working to repurpose the property for green energy production. The solar panels will soon arrive on site and be mounted to the racks currently being installed. The power generated from this single array is enough to provide daily electricity to approximately 200 homes or an entire Walmart store.

“Southwest Georgia has one of the best solar resources in the United States,” said Pete Marte, CEO of Hannah Solar. “Not only are we able to produce clean energy for the foreseeable future, which will be used in the community, this array will save over 70 million gallons of water over its lifetime.”

The support racking for the solar array is manufactured in New Mexico by DPW and the top edge will stand nine feet tall, complementing the surrounding environment. Marte remarked, “If you’re driving by you may not notice the solar array because it is silent, not much taller than an August cornstalk, and blue as the fall sky. Solar panels will produce clean, emission free energy for over 40 years and are 100 percent recyclable at end of life.”

Solar power is already present and in use in Bainbridge and Decatur County. As one of Georgia’s leading solar integrators, Hannah Solar has completed projects for numerous local farmers, including Dollar Farm Products, Brinson Farms— owned by Glenn Heard, PGC Farms—owned by Greg Calhoun, and members of the American Peanut Growers Group. Planting a solar farm in Bainbridge was an obvious choice for Hannah Solar.

“Farmers in the Bainbridge area understand that solar farming is just another way of harvesting the sun,” said Greg Kelly, Vice President of Hannah Solar.

The energy produced from the solar farm is contracted for 20 years with Georgia Power through the company’s Advanced Solar Initiative. This generating asset will be owned by Washington Gas Energy Systems with a long term Operations and Maintenance agreement with Hannah Solar. Financing was structured by the team at Deloitte Corporate Finance, LLC. The law offices of Greg Chafee of Thompson Hine, LLC, represented Hannah Solar throughout the transaction.

A Donalsonville man was seriously injured in a Thursday afternoon crash outside Brinson which resulted in two vehicles and a... read more