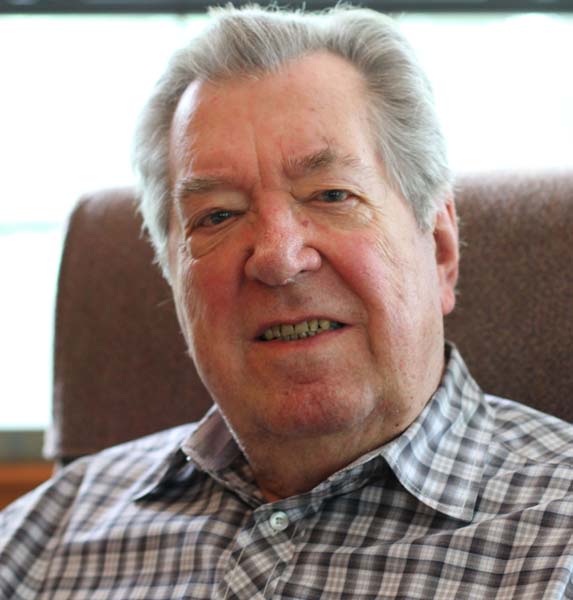 Dr. Ed Mobley was the founding president of Bainbridge Junior College, which was the name of the institution 40 years ago. Today, Dr. Mobley still maintains an office on campus.

How do you build a college?

How do you overcome a hard-fought bond issue to raise the $2 million to build the college?

How do you overcome a town still whirling from a World War II training base that closed years earlier, and struggling to recover economically?

And, how do you overcome a nation moving away from segregation and an area trying to steer clear of the hippy movement?

As Dr. Mobley likes to tell people when he stepped foot in Bainbridge as the new college president: “I arrived in town with a portable typewriter, a briefcase and a dream – a dream to build the best institution I could.”

How do you build a college? Have a dream, have people under you who share that vision and who will work hard to see it to fruition, and build relationships with others who may eventually migrate toward it. The brick and mortar was easy; the hard part was transforming the early skeptical mindset into a shared passion.

What Dr. Mobley accomplished — and what some succeeding presidents have reinforced — is the foundation of the college rests on its bond with those it serves.

Looking back over the 40 years of Bainbridge State College and 25 years under his leadership, Dr. Mobley can proudly say today that his dream came true.

“The most important legacy of the entire college is an opportunity for young people,” Dr. Mobley said. “That’s the thing I am proud of most. They did not have anything. Bainbridge was a different town.”

Bainbridge was different in 1972, and the times were different.

“The town had an interesting feeling about it. There was some resistance to the college, and it was almost that people were afraid of it,” Dr. Mobley said. “They soon got over that. People had told me they voted against the bond issue and how sorry they were later; that the college turned out to be a good thing.”

In September 1972, the Mobleys arrived in Bainbridge.

“I remember (the late) Raymond Miles saying that he almost hugged my neck when he first saw me because I didn’t have hair down to here,” Dr. Mobley said motioning to his shoulder. “You can imagine me coming from Harvard.”

Dr. Mobley was the academic dean of Dalton Junior College when Chancellor George Simpson tapped Dr. Mobley in March 1972 to be president. On the same day Dr. Mobley received the job offer in Bainbridge, he received word that he was offered a fellowship to Harvard University from the National Endowment for the Humanities.

He said he talked to the chancellor’s office and said he wanted the job but did not know what to do. Simpson told him to take the fellowship and come to Bainbridge after it was completed.

Dr. Mobley already had a Ph.D., so he took classes and sat in on lectures that interested him. He also became a follower and acquaintance of B.F. Skinner, a psychology professor at Harvard who invented the operant conditioning chamber, known as the Skinner Box. Dr. Mobley said Skinner’s tutelage would later help Dr. Mobley as president of a fledging college. He said he had used that philosophy — if you set the right conditions, you can expect these conditions to result – numerous times during his tenure.

Mobley’s hometown was Rome, Ga. He said the small-town atmosphere was the same in Rome as it was in Bainbridge, so he was familiar with how some people may be hesitant of a new college.

When he and his wife, Martha, moved here, Miles was the one who built their house but did not require an exchange of money to begin it. “He did it on a handshake really because there was no money exchanged or anything. So that proved to me the trust that was available with the people here in building a college.”

Some of the decisions he made in the college’s formative years were made because he was conscious of the community’s feelings.

A key decision was to make sure the college had a meaningful vocational education component, which to this day plays a vital role in the economic viability of the region and serves a majority of the college’s student body.

Dr. Mobley said when he and Martha first visited Bainbridge, their self-tour did not go well.

“The first time I tried to find the site, water was standing next door and I really couldn’t find where it was,” Dr. Mobley said. “I said, ‘My God, do I need to build a college over here?’ Nevertheless, it turned out to be a great site. There was a junk car in front of the borrow pit in front of the library. It was pretty rough looking.”

Now, he says he could not have asked for a more beautiful campus with its trees and nature trails. He said he wanted to preserve a lot of the woods and trees that were originally here, and now those trees are a fundamental essence and symbol of Bainbridge State.

Rocks found in area woods created one of the original fountains near the Student Services Building, which was built without the benefit of an architect. The college also built its own parking lots since it did not have the money to pave them.

“When we first opened, I thought we ought to rename it Munford College because it was such a do-it-yourself project,” Dr. Mobley said of the do-it-yourself stores popular in the North. One day he surprised the crew in plant operations when he showed up with his carpenter belt on ready to help build the gazebo behind the student center.

The college was located in downtown Bainbridge prior to its completion, which Dr. Mobley said was positive because he got a good feel of the community being in the center of it. “We outfitted the place with cardboard desks, which people in town thought was amusing.”

Because of the times, Dr. Mobley said he remembers going to one of the old high schools in Attapulgus, which he recalls as being one of the last to segregate in the state. While talking to the senior class, he felt there was a disconnect that he did not quite understand.

“Finally, toward the end, one young man raised his hand and said, ‘You mean we will be welcomed at that institution?” Dr. Mobley said of the encounter. “He later came to school here, but there was a great question about whether or not black students would be welcomed here.”

He added that the high school invited Dr. Mobley to be its commencement speaker at its last ceremony prior to shutting down.

Part of his recruiting efforts included passing out donated Coca-Cola and peanuts to potential students on Saturdays.

“We had to actually sell people to the idea that we are going to have a college, because that was the biggest handicap, selling the idea of a college because people hadn’t been used to that,” Dr. Mobley said.

The college started with 220 students. It was a rush right up to the time it opened in late September 1973.

“The night before, all the workmen were here putting desks together trying to get ready,” Dr. Mobley said. “We made it through. We opened up.”

Bainbridge State College, a state college of the University System of Georgia, provides an accessible, affordable, and excellent education for the diverse population of southwest Georgia and beyond through certificates, diplomas, and associate degrees, as well as through continuing education, adult education, and collaboration with other educational providers, resulting in life-long learning, economic development, and graduates empowered for success in a global society.