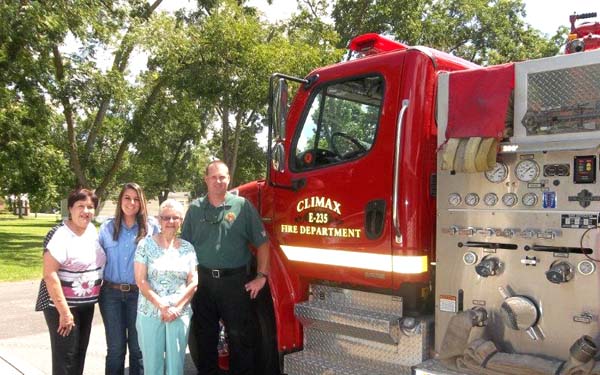 Climax Golden Agers Mary Breen and Gwen Wingate look over the Climax VFD Fire Truck after a program on safety by the volunteers Malori Maxwell and Christopher Wynn.

Speakers  at this month’s Climax Golden Agers were Lt. Christopher Wynn, a life-long citizen of the Climax Community and 20-year veteran of the Climax Volunteer Fire Dept., and Malori Maxwell, a firefighter who just finished her national registry for first responders.

They gave a most interesting program about home safety and what the volunteer fire department means to a community. They help with home insurance, as well as helping save homes from fire and aiding those with health conditions as first responders.

They gave a home fire safety checklist that included such hazards as smoking in the home, electrical issues, general housekeeping tips, such as keeping a clean basement, closets, and attics, and turning off appliances before leaving home.

Lt. Wynn also gave a brief history of the fire service stating it had only been around since the 1800’s. It began during the textile and steel years when many fires began in textile factories because of the lint and oil lamps.

The fire service began with what was called the bucket brigade, because there were no pumps on the fire engines. The steel industry brought the pump for the engines.

Wynn said the following years brought advancements by way of fire suits and the new technology of being able to see into the smoke and fire with a thermal energy cameras, thus making it possible to find people inside burning buildings. 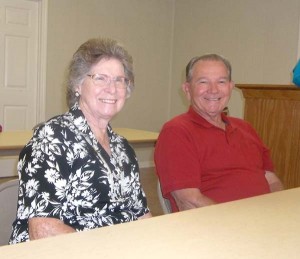 He said the VFD now covers much more than just a fire. They cover emergencies, such as wrecks, and disasters, and first responders provide aid to those in distress with a health condition while waiting for an ambulance.

He also talked about how the VFD helped with home owners insurance as the departments were rated with an IOS, (International Organization for Standardization) between 1 through 10. Climax has a city rating of 7 and county of 8.

The Volunteer fire-fighters had the new Climax Fire engine on display for all to inspect while lunch was being prepared. All expressed how much they appreciated the Climax VFD and were glad to have the new fire engine.

Devotional was given by President Bonnie Maloy from 1 Chronicles, “Be on your guard. Stand firm in the Faith. Be men of courage, strong. Do everything in love.”  She also read from a daily devotional book, “Never pray for easy tasks, but pray for power equal to your task. Then doing your task will be no miracle. You will be the miracle.”

Mark your calendar for next month, Wednesday after the 2nd Sunday, and come to the Climax Golden Agers meeting for some good fellowship and good food, hosted by the Climax Baptist Church.