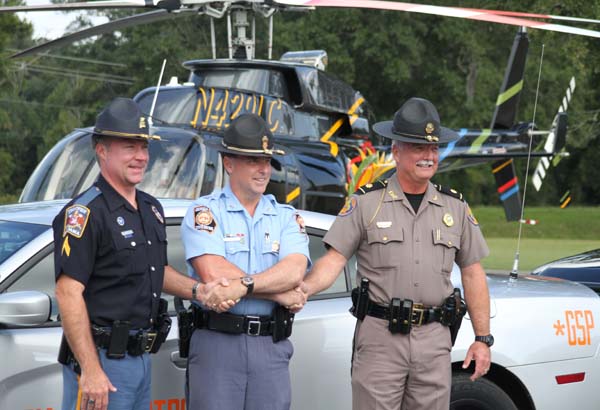 Representatives from the Alabama, Georgia and Florida state highway patrol agencies shake hands as a sign of support during the Hands Across the Border media conference Tuesday at Bainbridge State College. From the left, are Sgt. Steve Jarrett with the Alabama Highway Patrol, Capt. Buddy Johnson from the Georgia State Patrol and Maj. Mark Welch from the Florida Highway Patrol.

More than 180 law enforcement officers from the tri-state area held a Hands Across the Border campaign at Bainbridge State College, vowing to crack down on impaired drivers and other traffic law violators during the upcoming holiday weekend.

Saying they are united in their efforts to reduce traffic fatalities during the Labor Day weekend, representatives from Florida, Georgia and Alabama presented a show of force Monday and Tuesday as state troopers, sheriff deputies and municipal police departments from the three states urged the public to adhere to traffic laws.

Those officers also warned that if they catch violators, those violators would be prosecuted to the fullest extent of the law.

This local 22nd annual Hands Across the Border event kicked off in Columbus, Ga., and will work its way through Valdosta and eventually to Savannah, Ga., where officers from South Carolina will join officials from Georgia. A similar campaign is being held in communities along the Alabama, Tennessee, North Carolina and South Carolina borders.

Decatur County Sheriff Wiley Griffin said the Hands Across the Border campaign is all about saving lives. He challenged his fellow law enforcement officers to get tough on violators of DUI, seatbelt and child restraint laws, but to spend extra time explaining to younger drivers the suffering officers see on the roadways caused from accidents. 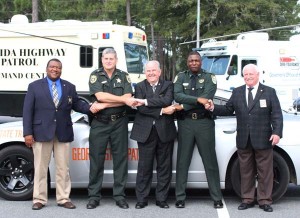 “I want you to give them a ticket, but I also want you to spend a few extra minutes on the side of the road with them and explain what you see on these roads, and it will save lives,” Griffin said.

Georgia State Patrol Capt. Buddy Johnson said the Hands across the Border campaign are to decrease the number of deaths on the states’ roads, not only by increasing enforcement measures but also by increasing educational opportunities. For example, he said if a violator is cited for improper child restraints, Johnson said he would also like officers to try to educate that violator of the importance of proper child restraints in saving that child’s life in the event of an accident.

Recalling the recent accident in Decatur County that killed three young adults in a single-vehicle accident, Johnson said, “No one who dies on our roads will die in vain; because from their tragedy will come the pain, from that pain will come the anger and from the anger will come the courage, and with that courage, lives will be saved.”

When Young took office nine years ago, he said he partnered with the Florida Highway Patrol after 32 lives were lost in vehicle accidents in Gadsden County.

“When we formed this partnership, we began to save lives; 32 deaths on our highways dropped to as low as 12. So we knew we were doing something right,” Young said. 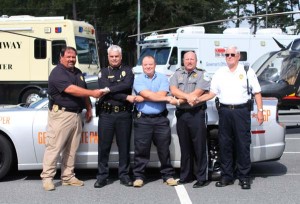 He also said drivers need to stop being distracted such as by texting. He recalled an advertisement of a mother putting her deceased daughter’s last text up on her phone. “It was amazing to see the faces of that young crowd: What would be your last text?” Young said.

Jackson County, Fla., Sheriff Lou Roberts said the partnership among Georgia and Alabama is very valuable because his county is the only one in Florida that borders both states. He said he strongly supports the Hands Across the Border campaign because it has proven valuable in previous years in educating the public on abiding to traffic laws.

Decatur County Deputy Ramsay Simmons said this is the first time it has been at Bainbridge State’s Charles H. Kirbo Regional Center. More than 30 different agencies involving more than 180 law enforcement officers took part in a dinner Monday and the Tuesday media conference.

“It’s really the last days of summer, and we want to let everybody realize that we are not going to tolerant the drinking and driving and no child restraints. We are going to be out there in force,” Simmons said.

During an 1?-hour road check on Monday night on U.S. 27 South at the Florida state line and the city of Bainbridge, officers reported arresting or citing five individuals for DUI, seven for suspended licenses, two for drug charges, 10 for seatbelt violations, nine for not having proper child restraints, three for not having insurance, one was a fugitive and 15 others for various violations.

TRAGIC SIGHT: A wooded area on Lake Douglas Road is now adorned with a white cross and some flowers. Handwritten... read more