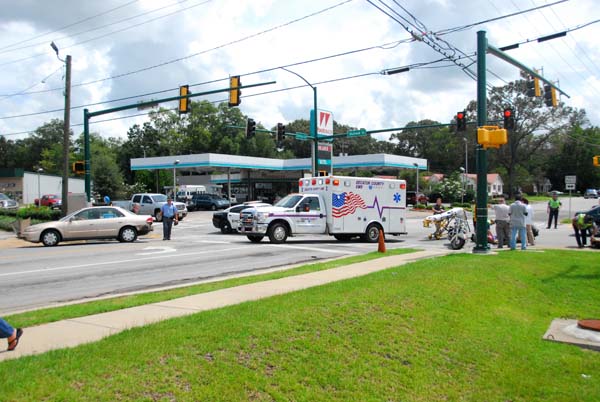 Decatur County Emergency Medical Service personnel and Bainbridge Public Safety officers tend to two people who were injured when their motorcycle was struck by a car at the intersection of Shotwell Street and Sims Street on Friday afternoon.

Two people were visibly injured Friday afternoon when their motorcycle was struck by a car on Shotwell Street.

The victims were an adult male driving the motorcycle, identified as Robert Langston, and an adult female passenger whose identity wasn’t immediately available, according to State Trooper First Class Brian Palmer of the Georgia State Patrol.

The accident happened at approximately 2:20 p.m. Friday at the intersection of Shotwell and Sims streets.

Thelma Louise Hand, of Bainbridge, was driving a Honda Civic eastbound on Shotwell Street and was attempting to make a left turn onto N. Sims Street when she collided with Langston’s motorcycle, which was headed west on Shotwell Street towards downtown.

“There was another vehicle headed west in front of the motorcycle, that was turning left [onto South Sims Street] that may have blocked her vision of the oncoming motorcycle,” State Trooper Palmer said.

Both Langston and his female passenger sustained possible broken bones, as well as cuts and scratches, as a result of being thrown off the motorcycle, Sgt. Ray Cox of Bainbridge Public Safety said. However, their injuries were not believed to be life-threatening, according to BPS.

A man whom police were looking for to serve warrants on found himself in more trouble after officers found suspected... read more