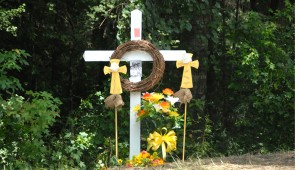 TRAGIC SIGHT: A wooded area on Lake Douglas Road is now adorned with a white cross and some flowers. Handwritten notes were tacked onto the cross, commemorating the three young lives that were lost here in car accident Friday night. Three funeral services were held Tuesday for Adam Goodman, Jordan Harris and Hilary Brock. These services were so crowded they were standing room only. — Brennan Leathers

By ASHLEY JOHNSON and BRENNAN LEATHERS

Yellow and orange butterflies flitted in and out of bushes lining Lake Douglas Road Tuesday afternoon, some of them momentarily landing on a large white cross.

The cross, adorned with flowers, notes and tributes, was erected in the days following a tragic loss of three of Decatur County’s young people in a car accident Saturday.

“Rest in peace,” “We love you,” We miss you” were just some of the handwritten messages left in memory of the three accident victims: Adam Goodman, Hillary Brock and Jordan Harris.

That was in addition to an outpouring of statements  by the community on social media. Several memorial Facebook pages were created and hundreds of posts were written by family and friends, all sharing their love for the three who died tragically Friday.

Jessica Thompson who attended the services for the victims said it is in times like these when she is proud of her community – a community, she said, that comes together to support its neighbors.

“In 1998 we had a similar tragedy,” Thompson said about the Dean family that lost three children in an accident. “I was 15 then and I remember thinking how grateful I was to be in community that showed overwhelming love, prayer and support for their family … this is a city where people show true love for their neighbors.”

Many noted that the city closed its doors to mourn Tuesday along with the families.

The funeral services for Goodman, Brock and Harris were standing room only Tuesday. Many went to all three services which were scheduled at different times throughout the day. Calvary Baptist Church was so crowded for Goodman’s service, several rows of standing attendees lined the aisles in the church and a crowd spilled from the vestibule into front entrance. 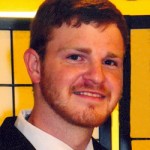 Adam Goodman, 23, was an employee of Lori Shiver at Crave Restaurant for about 8 months. “But it’s not like he ever really left,” said Shriver, as she recalled what a special employee he was. “Even after he left to take another job he would pop in the back door of Crave about three times a week to see everyone and find out how things were going.

“He was a very capable and dependable employee, and an absolutely creative artist with food. I told him many times with his imagination to create great food he should attend culinary school.”

Shiver said Adam understood business and was just an “old soul.” She said the ages of her employees range from 17 to 68 and he had a special one-on-one with everyone on the staff.

“What I will miss most about him is the way he made everyone he met feel special. He would greet the customers with a hug rather than a menu.”

“I am so happy I got to spend 17 years of my life with someone so amazing,” Goodman said, and told stories about her brother that had the crowd laughing; stories of things Adam did to make others happy — like going with his grandmother to buy a Cadillac in Florida, or dancing with a friend to make her feel better.

Adam’s father, Aaron Goodman stated through a letter read by his niece that Adam was, “the best child any parent would ask for.” 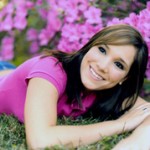 Hillary was a 2009 alumnus of Bainbridge High School and attended Bainbridge State College. She was an accounting clerk for Dollar Farm Products and was a member of Delwood Baptist Church.

Hillary is survived by a six-year-old son, Caden. Pictures she posted on Facebook document his first day of school, his first T-ball and soccer games, his birthdays.

“God knew what he was doing when he gave me a little boy,” she wrote earlier this year.

At Dollar Farm Products, where she had worked for the last six years, Hillary was a highly valued employee, CEO Tommy Dollar said. For the past two years, Hillary was responsible for the accounting paperwork for all of the peanuts brought into the company, which is a major buying point for American Peanut Growers in Donalsonville.

“She was so much fun to be around and she never had a bad day, so we’ll miss her a lot,” Dollar said. “She smiled so much we even made her a parking sign that listed her name as ‘Happy Brock’…She was a good girl, very well-mannered.” 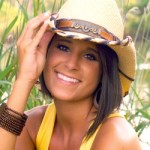 Jordan was a 2009 honor graduate of Bainbridge High School. She was a cheerleader at BHS.

She was a receptionist at Sweet Tea Day Spa and Boutique and a member of Sutton Chapel United Methodist Church.

Jordan was to have been a bridesmaid in the wedding of her best friend, Sarah Wells, another 2009 BHS alumnus who is working as a nurse in Atlanta.

Longtime Bainbridge High School Principal Tommie Howell talked about Hillary, Adam and Jordan all being BHS alumni, and their families having strong ties to the school.

“We are hearbroken by this tragedy, as is everyone in our community,” Howell said. “Our thoughts and prayers are with the families and many friends as we cope and begin the healing process. Hillary, Adam and Jordan will always be with us in our hearts.”

Friend and fellow dance instructor of Harris’ is Kacee Sellers, who described Harris as being someone whose smile and laughter was contagious.

“She was a ray of sunshine and loved to express it on the stage or on the field — just wherever she was,” Sellers said, adding Harris was involved with cheerleading as well as dance. Sellers said she was passionate about children and passionate about animals — both of which she showed much love to any chance she could.

Bainbridge State College will swing into its 40th-year celebration with no other than the Swingin’ Medallions. The college’s foundation is... read more