Their first day of school — at BHS 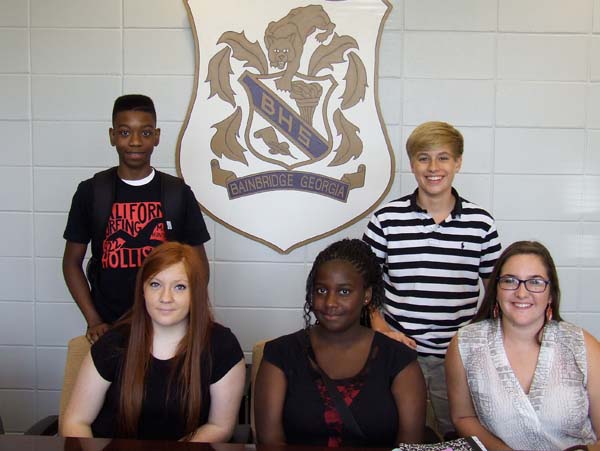 These five are a representative sampling of the incoming freshman class, indicating the Class of 2017 will be an exceptional one. Seated, left to right, are Summer Boyd, Shontesska Gordon and Emilee Poppell. Standing are Milton Gayle and Austin Prouse.

Five members of the BHS Class of 2017 shared some of their thoughts in an interview on their first day of school as “lowly freshmen” in the new high school.

All were excited and admitted to being a bit scared to be there. They were in agreement that the new building is very nice and impressive. Austin Prouse compared it to a small college, and that he liked all the hi-tech offerings. Emilee Poppell commented that what she liked best was that it was innovative.

Shontresska Gordon said that the best part about coming back to school after summer vacation is seeing your friends and catching up on what they’ve been doing, and the other students immediately agreed.

They were also in agreement that the worst part about coming back is getting up so early. The bell rings at 7:38 a.m. and those students who ride the bus, as Milton Gayle does, must catch it at 6:35 a.m.

The other down-side to school was said to be homework, yet all the students are very focused on academics and being successful in school.

They have set goals for themselves and have some suggestions they believe would make it the best school year ever.

Austin Prouse would like to have the freedom to use his personal technology, (tablet and/or cell phone) during his free time in school. Milton Gayle would like to see people on the “A” Honor Roll receive trophies. Summer Boyd echoed that theme, saying she would like to be recognized for her accomplishments; then added she would also like to see a better attitude from the older students. The five all reported being teased in the halls for being “Freshmen.” All would like to see an environment where student academics, other sports and achievements are just as important as football.

They do not choose lightweight subjects either. Their favorite subjects are math, science and history. Extracurricular activities are also important for successful students and they plan to become involved in future clubs and activities.

Both boys professed an interest in going into JRROTC, and nearly all five were in FCA in middle school. Shontesska said she had been in a book club she enjoyed, and also sang in chorus. This summer she attended Band Camp as a member of the color guard. Emilee and Summer were both in band in middle school, and Emilee will continue with band. Summer and Austin both played soccer, and are looking forward to playing soccer in high school. Milton played basketball on a traveling basketball team this summer and he wants to continue playing basketball in high school.

Ticket to dreams is an education

TICKET TO DREAMS: Getting some one-on-one attention is Fasiska Lyles of Blakely, who is taking classes for a GED at... read more