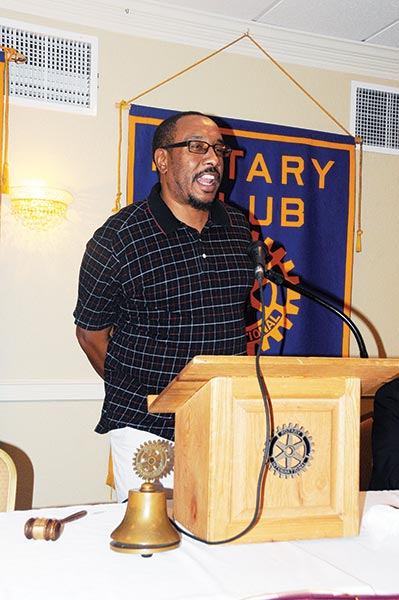 Stancil Tootle hasn’t let his blindness prevent him from living a productive and full life, and now he’s working hard to make sure that many other blind citizens have the same opportunities he has had.

Tootle has lived in Bainbridge for 30 years, and has been blind his entire life.

“When most people think about blindness, the next thought that they have is fear,” Tootle said. “They worry that being blind won’t allow them to live a complete life. But we believe that with the proper training and equipment, the average blind person can have the same opportunities as any citizens.”

Tootle said that the NFB is the largest and oldest advocacy group for blind people in the world, and helps the more than 16 million U.S. citizens who are blind or visually impaired.

He discussed several programs that the NFB offers to help those with blindness. One program is called “Newsline,” and it allows blind people to enjoy newspapers and other periodicals.

In order to use NFB Newsline, a citizen must first call a special number and then select the publication he or she wants to “read.” Then, a voice will read the stories over the phone to the citizen.

Tootle said that The Post-Searchlight offers its publications through the service, along with more than 300 other newspapers and magazines. Some of the publications offered include The New York Times, The Wall Street Journal, and the newspapers in Atlanta, Macon and Savannah.

“We encourage blind people to be just as involved in their community as those citizens who have sight,” Tootle said. “One of the best ways to meet that goal is by reading a local newspaper and getting the information you need to be an informed citizen. Newsline helps us achieve that need.”

Another program that Tootle mentioned was a mentoring program that pairs a blind child with a visually-impaired and successful adult. He noted that blind children need role models that they can relate to, and it’s important for them to hear from an adult who has overcome his or her disability to be a success.

“It’s very important that we allow blind kids to come into contact with independent people who share their disability,” he said. “We can show them that if these adults can do it, then they can do it.”

Another program that the NFB offers allows elderly citizens to still be able to use technology, even though they may be losing their sight. It involves equipment such as magnifying screens and dictation-recognition software, as well as classes with NFB volunteers who will teach them how to use the technology.

“There’s a lot of information out there and these programs allow everyone to have the same opportunity to access it,” he said. “A lack of vision doesn’t have to mean the end of life. A lot of people get depressed or sad when they feel like they are starting to lose their sight, but this program shows there are alternative methods to do the same things that they’ve always done.”

Tootle’s message was especially timely and appropriate, because Friday, July 26, is the 23rd anniversary of the Americans With Disabilities Act (ADA). The ADA is a civil rights law that prohibits, under certain circumstances, discrimination based on disability.

A second person has been charged in connection with a drug bust conducted by Bainbridge Public Safety at 527 S.... read more