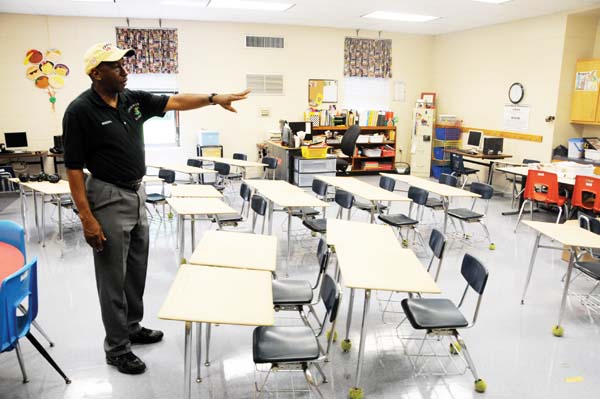 Dr. Larry Clark looks over a classroom at the temporary home of Jones-Wheat Elementary, which will have 2013-2014 classes on the campus of the old West Bainbridge Middle School.

The start of a new school year is always a busy time for teachers and administrators, but it’s been especially hectic for the staff at Jones-Wheat Elementary School.

The existing JWES building is in the process of being demolished, and will then be rebuilt on the same site. The new JWES building will be ready for students in fall 2014. For the 2013-14 school year, JWES will be housed at the old West Bainbridge Middle School building, on Dothan Road.

As a result, all of the desks, supplies, electronics and other items had to be boxed up and moved from the old JWES building to the WBMS building. However, JWES principal Dr. Larry Clark said that the move has gone very smoothly so far.

“We have really had some great cooperation from the maintenance staff and the central office to make this move a success,” Clark said. “The teachers have been working real hard to get their rooms ready, and I know that this is going to be a great school year.”

Clark said that workers began starting to clean the WBMS building as far back as November 2012, in order to prepare it for this summer’s move. The actual moving process began almost immediately following the completion of the 2012-13 school year.

“Everything had to be taken down, boxed up, and then taken out again at the new location,” he said. “But we had some great volunteers who were there to help us box items up toward the end of the year, while the students were testing.”

Donna McGlincy, the K-12 science coach, said she is very excited about the new science classroom, which is housed in the old middle school science lab. As a result, it already has several sinks and experiment tables in place — something that even the old JWES lab didn’t have.

“This is a great classroom space,” she said. “There is lots of room for the students to spread out and work on their experiments. It really feels like a science lab.”

Kindergarten teacher Brittney Mathews said that all of her boxes were labeled and it was an “easy transition” to move all of her supplies to the new classroom.

“It’s a very nice building and we’re excited to have school here, even if it’s just for one year,” she said. “Everybody who has seen the facility has been very impressed.”

Clark said most of the classrooms are just about ready for students, but there is still some work that needs to be completed before the start of the school year Friday, Aug 2. Some of the exterior is still being painted, and there are security fences that need to be installed. Security will be especially important at JWES, because the campus is comprised of several separate buildings and students will have to go outside several times a day in order to move from building to building.

Even though the move hasn’t finished yet, Clark said that the administrative staff is already pre-planning for the move back to the new JWES building in the 2014-15 school year. For example, teachers are being asked to save their labeled boxes, and those same boxes will be stored and used again next year for the return move.

While moving an entire school from one location to another might seem like a logistic nightmare, Clark said that the school staff is adamant that parents won’t see anything less than the highest teaching effort in 2013-14.

“We’re not going to let this move be an excuse,” he said. “We’re still going to provide a quality education for our kids, and we’re going to continue to improve our academic programs to make them even better.”

Becoming the “Pride of Decatur County” does not happen overnight, as the approximately 200 members of the Bainbridge High School... read more