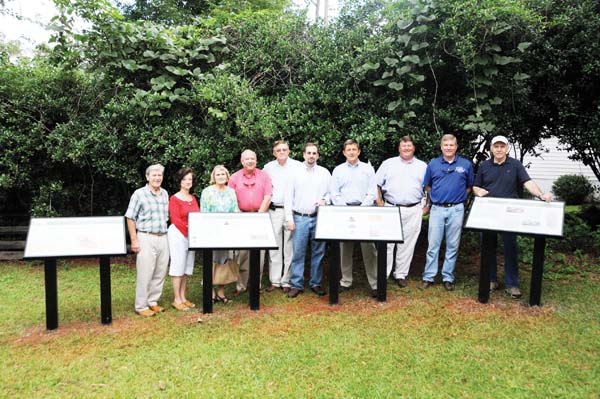 Visitors to J.D. Chason Park in Bainbridge can now enjoy a quick and easy history lesson, thanks to four informational plaques that were recently installed at the city park.

On Friday, representatives from the city of Bainbridge, Decatur County, local historical societies and the Historic Chattahoochee Commission (HCC) attended a ceremony for the plaques’ unveiling. The four plaques contain historical information and pictures about the Seminole Indian Wars, which included several battles fought in Decatur County.

The four plaques are part of the “Creek Heritage Trail,” which is a planned HCC project that will feature similar plaques at different historic locations from Bainbridge to Eufaula, Ala.

“We’re standing right here on the grounds of the historic Fort Hughes, which was a fort that played a role in the Seminole Indian Wars,” said Mike Bunn, executive director of the HCC. “It’s a beautiful location, because people can walk down to the river from here and it’s a nice setting to learn about the history of this area.” 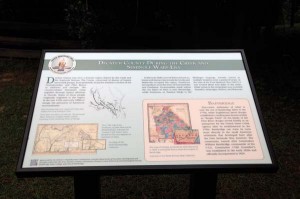 Bunn said that a more elaborate “grand opening” ceremony is scheduled for November, which is the anniversary month of the historic Battles of Fowltown in 1817. Bunn added that Bainbridge State College will provide some of the funding for that ceremony, which will also include a guest historical speaker, Dr. Joe Knetsch. Knetsch has authored several books about the Seminole Indian Wars.

The plaque project was funded through a collaboration of grants from the Department of Economic Development and the Georgia Council for the Arts, as well as private donations. Decatur County employees assembled and installed the plaques, and the city of Bainbridge assisted with the project as well.

Assistant City Manager Roy Oliver said that plaques were a great addition to the historic park. The city of Bainbridge also recently moved another historic marker to the park — a boulder with a plaque stating that U.S. Gen. Andrew Jackson and his troops passed through Bainbridge during the First Seminole Indian War in 1818. That historic marker had been previously located at the Earle May Boat Basin.

“This a great centralized location where anyone can learn about the unique history of Decatur County,” he said.

Bunn said the HCC hopes to have at least a dozen similar plaque centers installed in Georgia and Alabama by the end of 2014.