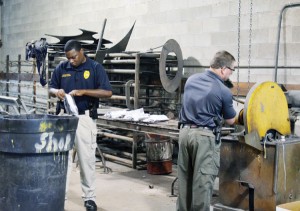 A number of the firearms wound up in BPS’s possession after being seized in criminal cases, while others had been found or were abandoned property, said BPS Major Robert Humphrey, the department’s chief investigator.

“The firearms were mostly handguns, along with a few semi-automatic weapons,” Humphrey said. “The guns that had been seized as part of criminal investigations dating back to the 1990s up through the present. Some of the guns were so old that all we had was an evidence receipt attached to them.”

Because the guns no longer had any value as evidence, Public Safety filed an application to Decatur County Superior Court requesting permission to destroy the firearms, which was subsequently granted. To complete the application process, BPS had to provide descriptions of each firearm as well as detail what case they were associated with, if any, and what the outcome of the case was. BPS also checked in the Georgia Criminal Information Center’s computer database to see if any of the guns had been reported as stolen.

To destroy the weapons, Humphrey and BPS investigators Mark Esquivel, Chip Nix, Ryan Deen and Anthony Stubbs went to the City of Bainbridge Shop Department, which has a bandsaw it uses. Officers placed each firearm under the bandsaw’s blade to cut them in two. The guns were then disposed of in barrels. The entire process was documented with a video camera.

“Sometimes, because of what they see on television, people have misconceptions about what happens to guns that are seized by the police,” Humphrey said. “We keep a very close watch on how each weapon is stored and what happens to them. We don’t want to hold on to them for any longer than they are needed for court.”

“We feel that destroying these weapons will ensure that they will be off our streets and make our community safer.”