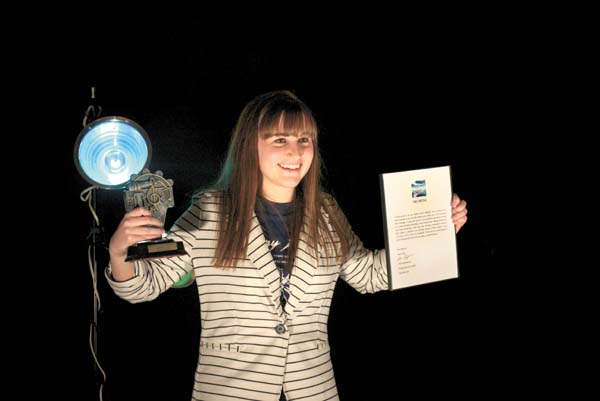 Caylin, the eighteen-year-old daughter of Mike and Carol Walsingham, attends Covenant College in Lookout Mountain, Ga., where she is studying music.

Back in April, she won “North Georgia Idol,” held at the Copperhead Lodge in Blairsville, Ga.

Her prize was a full production studio recording session, valued at more than $5,000, compliments of the event’s sponsor, Sean Clyde of C & C Media, based in Young Harris, Ga.

Clyde is a two-time Grammy nominee and CSRA Hip Hop Award Winner. He has produced some of the top talents in the world, including Michael Jackson, Alanis Morissette, Trisha Yearwood, and Garth Brooks.

He has worked with some of the best-known music labels including Atlantic Records, Sony, RCA, and Virgin Records.

In her first round performance, Walsingham performed “A Thousand Miles” by Vanessa Carlton.

When she was selected as one of the five finalists to compete for the title of North Georgia Idol 2013, she returned to sing her version of “Drops of Jupiter” by Train.

“Ever since I was little, singing has been a passion of mine,” Walsingham said. “When I get up to perform, its not just about singing a song, but about communicating a message. I feel the music in my heart and in my soul.

“Singing is the only thing I can see myself doing for the rest of my life, and the thought of being able to record my own songs means so much to me.”

With her family watching on, Walsingham has already recorded several songs with Clyde, both Christian and pop.

Music fans can check out Caylin performing covers of popular songs, as well as songs she has written herself, www.youtube.com/user/CaylinBritt. Her Twitter address is @CBWalsingham

Some of the information in this article was originally printed in the Towns County Herald of Hiawassee, Ga.