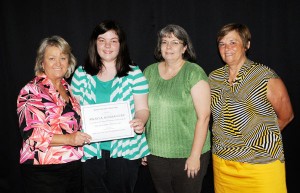 The Duke TIP program is a three-week academic program that provides gifted rising freshmen with the chance to earn college credit before they even start high school.

To qualify, students must pass vigorous tests throughout their middle-school years. First, about 75,000 seventh graders are invited to take the SAT or ACT college entrance exams each year, based on their end-of-grade test scores in the sixth grade.

Those seventh graders whose SAT and ACT scores are high enough then receive an invitation to participate in the TIP program. Buckhalter applied to enroll in the program at the Duke East campus, where she will be one of the 3,700 students enrolled in 2013 and one of only 900 students who will take a course at Duke East or Duke West this summer.

Buckhalter has chosen to take a class on the apocalypse, and how it is presented in film, literature and other artistic media.

“I really like writing, especially science-fiction and dramatic writing,” said Buckhalter, the daughter of Kaye Buckhalter and Michael Buckhalter. “I’m a little nervous about what I’m going to do when I get up there to Duke. I’ve never been away from home for more than a weekend.”

Kaye laughed and quickly interjected that “I’m really the nervous one.”

“I’m very grateful to the Faircloth Scholarship for allowing Mikayla to do this,” she said.
The scholarship is named for the late Dylan Faircloth, who attended the TIP summer programs on Duke East from 2005 through 2009, always choosing psychology courses. He was tragically killed in a car accident on July 9, 2010, shortly after his graduation from Bainbridge High School.

“This is our first female student to receive the scholarship, so I’m very excited about that,” Faircloth said. “Mikayla has a lot in common with Dylan — they both love to write, for example.

“Next to Dylan’s salvation, I can honestly say that the Duke TIP program played the most valuable role in shaping his life. I am pleased that Mikayla qualified to meet the criteria this year.”