Mother of 8 has overcome many challenges 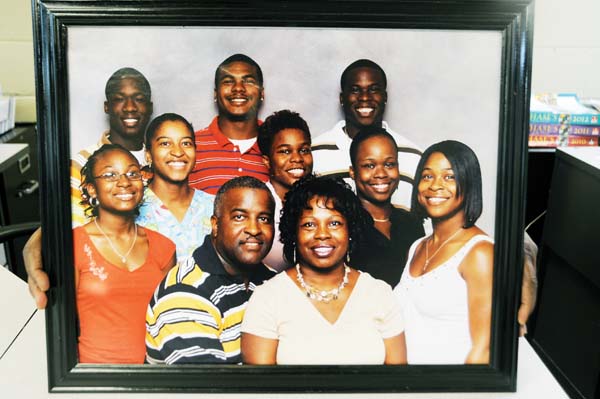 BIG HAPPY FAMILY: Lora Akins and her husband Robert are surrounded by their eight children.

Lora Akins has quite a resumé qualifying her for special recognition this Mother’s Day weekend.

She has raised eight children. She has nine grandchildren. She has survived colon cancer and liver cancer. All this time she has worked as a health service technician and certified direct healthcare provider, first for 12 years at the Bainbridge State Hospital until it closed. Then she transferred to the Southwestern State Hospital in Thomasville where she has been for 12 years.

When her first marriage ended in divorce she was left as a single parent to raise six children. She said she worked two and three jobs at a time to make ends meet, and is proud that she never took welfare or food stamps. But, then she corrects herself saying they handed out food stamps to everyone affected by the 1994 flood. Akins’ home, with four feet of water, was one of those destroyed. She lost many of her personal memorabilia along with her home, but she rebuilt and started over.

She still had three of her children living at home in April 2006 when she was first diagnosed with colon cancer. She had her first surgery in Thomasville.  Through all the treatments and surgeries she tried to keep up with the children graduating, going to prom and being active in school activities. She recalls her son Antoinne Perkins came dressed in his prom suit to visit her in the hospital right after her surgery.

In January, 2007 she had surgery in Emory Hospital to remove 20 percent of her liver after the cancer had spread to it.

For seven months she went back and forth to hospitals, took chemo and radiation treatments that made her very ill, and kept on working her job and caring for her family. 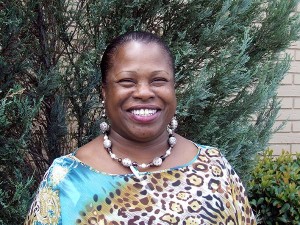 She comes from a family of 11 children and credits her own parents, Thomas and Gladys Jackson Jr., as setting good examples.

“As I grew up I tried to become humble and follow their examples,” she said. “I wanted to instill those same things to my own children.”

She says her parents were always there for her, attending school functions and supporting the family in all their activities. She is thankful for all the help her family has given her through the years.

“My father always told us, ‘As long as there’s life there’s hope,’”Akins said. “I have leaned on that phrase many times. I could feel his presence telling me that when I was so sick.”

Akins believes many times people die because they lose hope. She said she had so much to live for, that she couldn’t give up.

She has been married to Robert Lee Akins for 18 years. Her children all call him “Pop.” He works as a CNA at Memorial Hospital and is also a corrections officer at the Bainbridge Probation Substance Abuse Treatment Center.

Her children have all graduated from high school, many with honors. Two have graduated from Bainbridge State College, and another from Fort Valley State University.

She said most of the kids will be home Mother’s Day weekend, and there are many reasons to celebrate. On Saturday, May 11, Akins will complete her own studies to become a CNA, a career she plans to pursue after she retires from the state hospital. Saturday is also a son’s birthday. They will all go to her Mom’s on Mother’s Day morning, then to church, then gather at her home where they will cook and eat, sing and dance, pray and have a good time.

“I’ve always loved to sing,” said Akins, who sings alto and tenor, and is a member of three choirs, including the Russell McGriff & Union Baptist Mass Choir, the 1st African Baptist Church Choir, and was one of the founders of the Rev. James Clark Community Choir.

She has much to sing about this Mother’s Day.

A group of 20 police officers and firefighters passed through Bainbridge on Monday, as a part of their 700-mile bicycle... read more