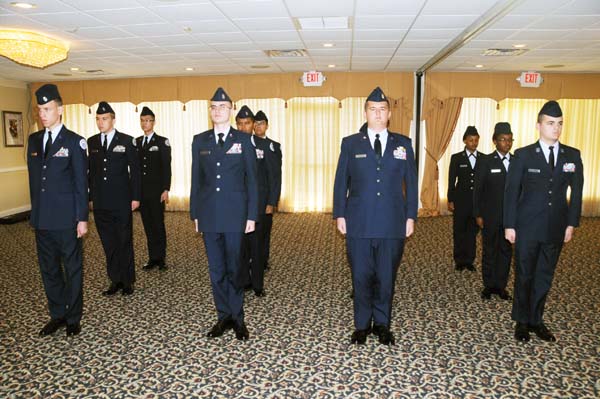 Lt. Col. Dave Stewart, who heads the BHS program, told the club that the BHS cadets recently participated at a national drill competition in Daytona, Fla. He said there were teams there from all over the world, including Guam, and that the BHS inspection team placed fourth in the competition.

Stewart said that the day’s drill meet began at 7 a.m. in the morning, and finished at 8:30 p.m. Some of the events in the competition included regulation drill, inspection, a color guard competition, and exhibition.

Stewart said there are 121 cadets in the program this year. He added that about 80 to 85 of the program’s cadets either go on to be in the military, join an ROTC program at a college, or are accepted into a military academy. The most recent military academy appointee is BHS senior Hunter Savage, who will attend the U.S. Naval Academy in Annapolis, Md.

“It’s an honor to come and just show a little bit of what our program is about,” Stewart said.

While Decatur County Schools administrators were pleased by some of the results of the state’s recent College and Career Ready... read more