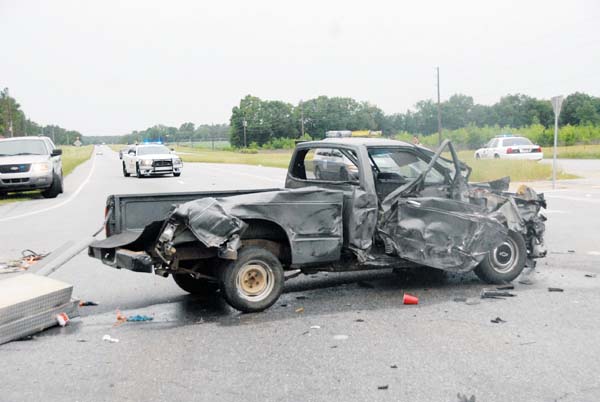 Two Decatur County men were injured when their pickup truck collided with a log truck on U.S. Highway 84 West on Wednesday afternoon, according to the Georgia State Patrol.

Aaron Michael Bryan, of Country Club Road, Bainbridge, was driving a 1989 Chevrolet S-10 pickup south on Georgia 310. At the same time, an empty log truck driven by Ronnie Christopher Hallman, 44, of Quincy, Fla., was traveling east on U.S. 84 towards Bainbridge.

According to an accident report filed by Sgt. First Class Marc Godby of the GSP’s Colquitt, Ga., post, Bryan failed to yield to the log truck while attempting to cross over U.S. 84 West. The pickup truck struck the left side of the log truck, causing massive damage to the front end of the pickup, and spun around before coming to rest in the eastbound lanes of U.S. 84.

Bryan and a passenger in the pickup truck, Michael Anthony McEntee, 44, of Dothan Road, Bainbridge, were both injured, although not seriously. They were taken by EMS ambulance to Memorial Hospital, where they were treated and released later on Wednesday, according to Sgt. Godby. Both Bryan and McEntee were wearing their seat belts.

Hallman, the driver of the log truck, was not injured.

Sheriff’s deputies, Decatur County Fire and Rescue firefighters and volunteer firefighters also responded to the scene of the accident. Sheriff’s deputies controlled traffic at the intersection for more than an hour after the wreck, due to the pickup truck blocking one of the eastbound lanes and the presence of a large amount of debris in the roadway.

The official River Town Days T-shirt is now available for $10 each, at all area banks and the Bainbridge-Decatur County... read more