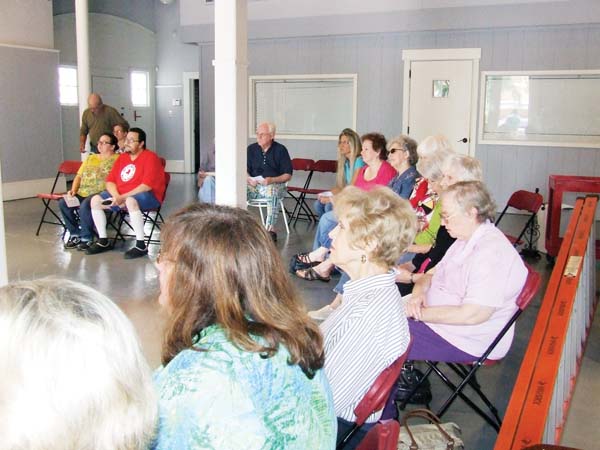 A small crowd of approximately 40 people joined in praying for the nation at the local observance of the National Day of Prayer held in the Firehouse Gallery Thursday at noon.

Sponsored by the Bainbridge Ministerial Association, special prayers were offered by ministers and community leaders.

Col. Gary Breedlove, Decatur County administrator, prayed for wisdom for those in government, saying perhaps at no time has the country been in greater need of prayer than now; while Decatur County Superintendent of Schools, Dr. Fred Rayfield’s opening remarks commented that it was a shame that the event was not taking place in a facility like the Kirbo Center with every seat filled. He advised a regime of reading the Bible and praying without ceasing.

Others who led the group in prayer were: The Rev. Damon Edwards of First Christian Church, who prayed for those separated from families either through death, incarceration, or other events; Marcia McRae, an Episcopal priest who prayed in both English and Spanish; Chris Beam of Samaritan Counseling who prayed for marriage and families; Decatur County Sheriff Deputy/Rev. Ken Davidson of Evangel Temple of God, who prayed for public servants and those who put their lives in danger to protect others; Rev. Lynn Roberts of Sutton Chapel United Methodist Church who prayed for churches and pastors who need to be stronger; and Rev. Donna Bevels of First Church of God, who gave the benediction.

The music was led by Randall Terry, minister of music at Morningside Baptist Church.

Grace track team off to strong start at state

The Grace Christian Academy track team was off to a strong start through Thursday’s competition at the GISA state track... read more