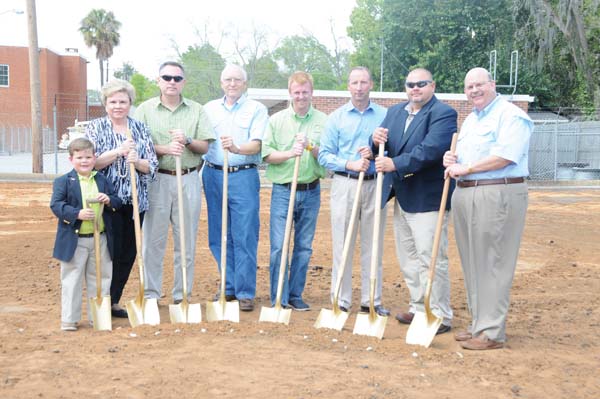 The First Baptist Church of Bainbridge broke ground Sunday evening on a brand-new youth activities building that will be built on the church campus.

The 5,200-square-foot building, which will be called the “Raymond Miles Youth Building,” is expected to accommodate up to 300 young people. Contributions of more than $375,000 have been received for the building, and construction will begin immediately and is expected to take about six months.

The building is being constructed in the east parking lot of the church property, on Shotwell Street.

Brian Steward, the church’s minister of students, spoke Sunday about the need for the facility.

“I’m very excited that God has given us a place that is much bigger and that we can bring many more students to,” he said.

Steward said that the church’s youth programs have flourished and increased in popularity each year, and it will be wonderful to have a building just for the youth ministry.

The Rev. Paul Medley, pastor of First Baptist Church, said that the seed money for the youth building project was first donated about three years ago.

“It was placed in a CD account and set aside for a time when God would be ready for it to be used,” he said.

He said that the youth leadership team met last May to first discuss going forward with the construction, and that they brought the idea to the regular church business meeting in December. At that December meeting, the church leadership agreed that the building would not be built until all the funds were in hand to complete the exterior construction.

“Amazingly, it only took from that second week in December to the first week in April to raise the funds,” he said.

Medley said that a large amount was donated by the Raymond Miles family, and many other church members and community members also contributed their treasure to the goal.

“We just want to thank you and everyone who had a part in making this happen,” he said.

Medley quoted Luke 20:38, saying that “God is not the God of the dead, but of the living, for to him all are alive.” He said that the youth building will truly be alive because the youth “are alive for the Lord.”

“It will also be a lively building, full of activity,” he said. “I believe that we will be leaving a legacy to the generations to come. They will know that, years ago, somebody believed enough in them to prepare a place for them, just like our Father is preparing a place for us in heaven.”

Medley also invited those in attendance to come back in six months, for a dedication service inside the new building.

During the ceremony, several religious songs were performed and sung by the praise band and Art Bruce, the church’s minister of music. The praise band members who performed were Lindsey Duke, Chelsey Jones, Kelsey Harrell, Ben Mitchell and Noah Thorn. 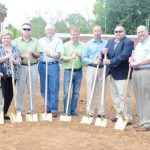 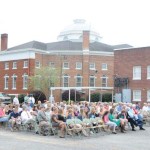 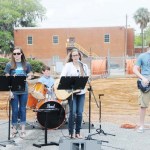