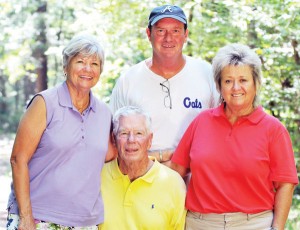 Editor’s Note: April is National Donate Life Month, and The Post-Searchlight will be running a series of stories throughout the month focusing on organ donation, and the lives that it touches.

June Faircloth is excited that more Decatur County citizens have signed up to be organ donors, but still continues to work hard to educate the public about the needs for organ, tissue and eye donors.

Faircloth is the local transplant advocacy group (T.A.G.) representative for LifeLink of Georgia, an organization devoted to saving lives through organ donation. Faircloth lost her 18-year-old son, Dylan, in an automobile accident in July 2010, but her son was an organ donor and his kidneys, liver, cornea and heart helped save the lives of other people.

In fact, Faircloth said that research shows one organ donor can potentially “touch” the lives of 50 people.

“It really is a way that you can give the gift of life,” she said.

April is National Donate Life Month, and according to LifeLink of Georgia, there is still a great need for organ donors. More than 116,000 men, women and children await life-saving or life-enhancing organ or tissue transplants, including 3,700 in Georgia alone.

In addition, a new patient is added to the national transplant waiting list every 18 minutes.

Faircloth noted that the message seems to be reaching Decatur County citizens. From Jan. 1, 2012, until the present, more than 1,580 additional local people have signed up to be organ donors. That’s a considerable number for a county with a population of about 28,000. Currently, there are more than 11,400 county citizens who are organ donors, Faircloth said.

“The message is getting out locally, and I’m excited about that,” she said. “But there are still so many more we can reach.”

In fact, Faircloth is also taking her message of organ donation to a national level. She was recently selected to be one of 12 featured stories in the national LifeLink “Faces of Transportation 2013” calendar.

Faircloth’s photo is featured on the September month of the calendar, along with a photo of Stan Gann. Gann, a retired high school football coach in Warner Robins, Ga., received Dylan’s heart. The story also talks about the Epic 5K, a run held each year in Dylan’s honor, and which is used to increase public awareness of organ donation, and also raise scholarship funds for high-school students.

The photo shoot for the calendar was done at the Spring Hill Christmas Tree Farm, where the Epic 5K is held each year.

“LifeLink of Georgia had nominated my story to be in the calendar and they called to ask if it was okay,” Faircloth said. “I said it was fine, that I would do anything to bring more attention to the cause. But I asked if we could have the heart recipient included as well, because he’s such a big part of Dylan’s story.”

Faircloth said that she has several copies of the national calendar, and anyone who would like one is more than welcome to call her and request one, as long as her supply lasts. She is also working to hopefully create a local calendar featuring citizens whose lives have been touched by organ donors.

For more information about organ donation, or to sign up to be an organ donor, visit online at www.donatelifegeorgia.org. To reach Faircloth, call (229) 246-4670.

The following arrests and citations, a list of those occurring between March 30 and April 2, 2013, have been reported... read more