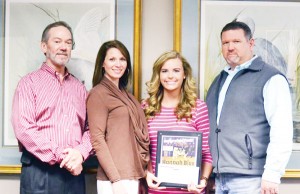 Bius’ heifer Chanel, a black and white Shorthorn crossbred heifer, took home the top prize with some help from her family and the use of feed produced by Flint River Mills Inc. (FRM) of Bainbridge.

Bius’s father, Bainbridge High School agriculture teacher Martin Bius, went to Oklahoma to get Chanel, who was sired by a club calf bull named Monopoly. Bius balances showing cattle with her high school classes, FFA activities and being a member of the BHS varsity football and competition cheerleading teams.

She began raising Chanel when the calf was only 6 months old, until the age of 17 months, when it won at Perry. Bius and her father made twice-daily trips to the livestock barn at the Decatur County Fairgrounds during that time, working to properly feed the heifer, exercise her, groom her coat and raise her to be successful.

They exclusively used FRM’s Heifer Developer feed, made at the company’s Bainbridge plant.

“Raising Chanel took a lot of time and hard work, staying up late at night and doing whatever it took to make sure she was growing up healthy,” Hannah said. “Many evenings, I’d finish with cheer practice and then meet my dad at the barn to take care of Chanel.”

Bius has been raising and showing cows since she was 9 years old. She had previous experience showing pigs since age 5, then decided to focus on cows once she became old enough to take care of them.

“You learn how to show off the cow’s aspects and maintain a positive show presence,” Bius said of the experience.

Both Hannah and her older brother, college student Will Bius, had won awards for their cows in the past, but this was the first time the family had ever won a state-wide award.

“Showing livestock is definitely a team effort by my family,” Bius said. “I couldn’t have won without the support and help of my parents and brother.”
Bius won a $2,500 prize for showing the Grand Champion Breeding Heifer at Perry. Soon to be a rising senior at BHS, she said she’s putting the money in her savings account to help with college.

This past week, Hannah and her family attended a banquet hosted by Georgia Farm Bureau in Macon, Ga., where she and other state livestock winners were recognized. Farm Bureau sponsors all of the state champion winners.

As for Chanel, the Biuses sold her to a farm, but Hannah said the prize-winning heifer will probably one day have numerous offspring of her own.