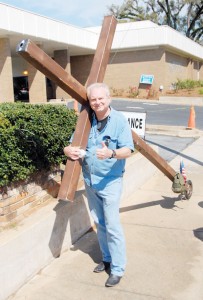 Rick Newton, who has been carrying a Christian cross around the world since 1975, passed through Bainbridge last Thursday afternoon, on his way to Dothan, Ala., and eventually to Central America.|Brennan Leathers

A man walking around the world carrying a large Christian cross passed through Decatur and Seminole counties within the past week.

Last Thursday, Rick Newton could be seen walking down Shotwell Street with his 37-pound cross made out of PVC on one of his shoulders. The bottom of the cross has a wheel to help Newton, who said he has been walking with a cross for 38 years, as he makes his journey from state to state, country to country.

Newton said he began carrying a cross in 1975, during the annual Mardi Gras festival in New Orleans, La. The idea then was to place a Christian witness amidst a secular environment. Since then, Newton has carried the cross, in order to spread what he says is a message of hope across the United States, Canada, Central America, Europe, Africa, the Middle East and the South Pacific.

Even more amazing, for the first 30 years of his trek, he carried a wooden cross that weighed 76 pounds until his doctor advised him to carry something less heavy.

On Thursday, Newton said he was headed to Dothan, Ala., and then was going to attend a pastors’ conference in Kentucky next month before heading to his eventual destination of Chile.

On Monday, motorists spotted two men, one costumed as Jesus, carrying a similar cross along U.S. Highway 84, headed east. It wasn’t immediately clear who they were; however, people who spoke with them said the men were spreading the Easter message.

Newton’s ministry is based in Lanesboro, Mass. and can be contacted by calling (865) 368-2192 or visiting www.rncrosscarrier.org.

Whatever happened to ‘The Old Rugged Cross?’

Has there ever been a title to a song that evoked such imagery as “The Old Rugged Cross?” I know... read more