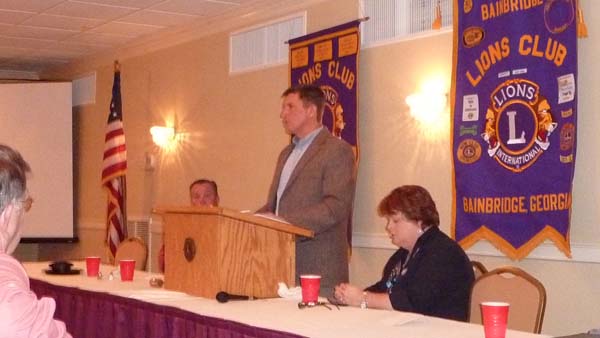 Mayor Edward Reynolds was the guest speaker at the Bainbridge Lions Club’s meeting on March 13.

Before Reynolds was introduced, the members signed a get-well card to be delivered to Lion Joe Crine, who is recovering from an injury he sustained while covering a track meet on Saturday, March 9.

Reynolds gave the club a detailed update on all of the city’s capital projects that are currently in progress or recently completed. He said we must continue to invest in city improvements to ensure effective public safety, an attractive environment to encourage private industries and small business growth. He also said the city could attract sales tax dollars by having statewide tennis, baseball and softball tournaments, and major fishing events.

Reynolds fielded questions from the members concerning various topics members wanted to address. He closed by suggesting that citizens can make the city aware of problems by using the “See It, Click It” feature on Bainbridge website to process the complaint or suggestion to the proper employee or department. The city’s web site is www.bainbridgecity.com.

Lions President Brenda Howell was pleased to announce that the club had donated $2,000 to the Bainbridge Lions Club scholarship at Bainbridge State College, and that the total scholarship is now $15,000 — plus an additional $500 scholarship that will be awarded this spring at the college during the Honors Ceremony. The club also purchased a name tag for one of the auditorium seats in the BSC’s Kirbo Center.

School board to meet Friday evening

The Decatur County Board of Education will have a called meeting Friday, March 15, at 5:30 p.m., at the Schools... read more