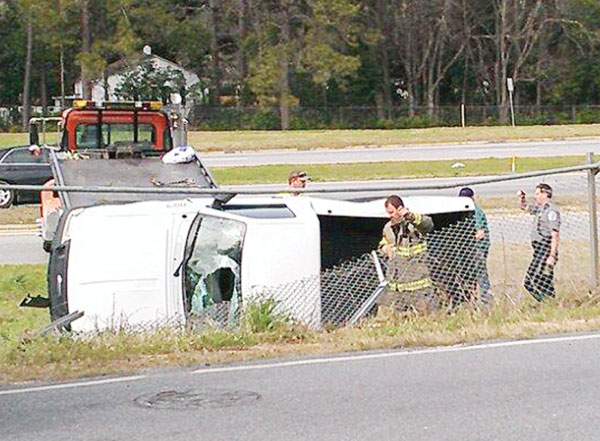 Three people were hurt Thursday afternoon, after a crash near the intersection of Alice Street and West Street.|Brennan Leathers

Three people were injured in a Thursday afternoon crash that sent a pickup truck careening through a chain-link fence.

The accident happened shortly before 4 p.m. on the portion of Alice Street that runs between the Bainbridge Walmart and the U.S. Highway 27/U.S. Highway 84 bypass.

According to Bainbridge Public Safety officers, a Ford Ranger pickup truck driven by O’Reilly Auto Parts employee Tiffany Deese was headed toward Tallahassee Highway. Ashley Clemons, who was driving a Honda Civic toward West Street, apparently lost control of her car and struck the driver’s side of the pickup.

The collision caused the truck to spin around and overturn, rolling through a chain-link fence and onto the grass shoulder of the bypass, where the vehicle came to rest on its side.

The pickup truck’s windshield shattered. However, Deese’s stepfather, Steve Winburn, said he did not believe her injuries would prove to be serious.

Clemons’ car also spun out and came to a rest onto the side of Alice Street. Clemons’ passenger, LaQuisha Gaines, was unrestrained and hit her head on the windshield, causing it to crack.

All three women were transported to Memorial Hospital by Emergency Medical Service ambulances. Traffic on Alice Street was temporarily detoured.

SUSPECT SEARCH: BPS are seeking the driver of the truck pictured here as a suspect in a battery. The truck... read more