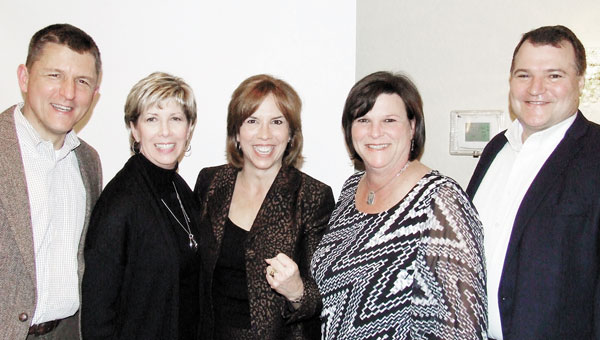 It was an evening of embellishing the truth and the telling of half-truths, all sprinkled with a few out-and-out lies Thursday evening, as Glennie Bench was the subject of the 29th annual Pilot Club roast.

A large crowd filled the dining room of the Charter House Inn to witness the event.

As emcee Charles Tyson said in his opening remarks, “Everyone wants to see Glennie ‘get it.’”

And, “get it” she did, from her long-time friends, family and colleagues who know the “real Glennie,” as they jokingly put it.

It was said by all that Bench had always been regarded as “a sweet kid,” then they went on to tell the “real truth,” as they saw it. It all made for a night of humorous stories told about a gal who proved she can take it as well as give it.

The first roaster, Lori Shiver, who is owner of Crave restaurant and a friend from school days, kicked off her views on Bench’s cheerleading passion by incorporating a group of young cheerleaders who led the crowd in a cheer that ended, “All in favor of roasting Glennie, stand up and holler.”

Shiver said Bench’s cheerleading and football craze has continued all her life, from the point where she married a football coach, to today when she harasses the coaches and heckles the referees at all the games.

Ending on a kinder note she praised Bench for being a cheerleader for life to her friends, family and co-workers.

Next up was Bainbridge Mayor Edward Reynolds, who explained he grew up in the same neighborhood with Bench, playing kick the cans at night.

He described her as “very sassy at school,” saying when she was 13 she gave her social studies teacher (Luther Conyers) a $5 certificate off the price of a funeral from Cox Funeral Home, the family’s business. Conyers reportedly complained that the Coxes sold the business before he could redeem it.

He also recalled how she had competed and won the title of Georgia Junior Miss in Mobile by developing and performing a monologue on gas pricing, a humorous reference to a subject she is often called upon to explain in her position as finance executive with Inland Oil.

Reynolds continued his jibes saying she developed her cheerleading voice in high school, and now at Penn State (where son Stephen is a quarterback) the school has had to clear six rows around her stadium seat.

“She learned early on that money makes the world go round,” Reynolds joked. “She knows where control is and is not afraid to use it.”

He concluded by saying he treasured the time they’ve spent together from childhood to the present day, as Bench serves on the city council.

Cathy Cox, Bench’s older sister and president of Young Harris College, made the trip to Bainbridge to participate in the fun. She began by saying that as an educator she felt compelled to deal in the truth. And she warned that the truth is, “There is a dangerous woman in your midst.”

In a PowerPoint presentation, she showed photos of Bench at various stages of her life, beginning and often returning to the petite, sweet, little sister, who morphed into the “fist-clenching ninja” seen in later photos.

The mystery roaster turned out to be Mark Harrell, former mayor of Bainbridge, who began by saying he couldn’t find many interesting things to talk about in her life, “After all, she is a CPA — How interesting is that?”

But he went on to relate some tales of knowing her since kindergarten and that they shared the same birthday. He said when she came to work with him at Inland Oil it was the best thing for him, as he always hated firing people.

“But she loved it,” he claimed. He joked that he worked well with her at Inland until she fired him.

Harrell spoke of some of the incidents on business trips taken together and how she convinced him to run with her and a group in the Disney marathon. He joked that he went on the city council, then became mayor and was happy. Then, along came Bench, who told him, “I’m running for Edward Reynold’s council seat and he’s running for mayor and you won’t be here any more.”

Through all the exaggerated testimonies, Bench and her husband Steve laughed good naturedly, and when Bench took the microphone in rebuttal she said, “I never had so much fun getting run over by a bus.”

She went on to compliment the Pilot Club on their activities, saying in addition to their work with brain related issues, they sponsor the Anchor Club, the Woman of the Year, and help with the Special Olympics Snowflake ball. She acknowledged Bainbridge’s own Gail Sharber as being the current state Pilot Club president.

She then asked how an organization with so much prestige would have such a dark side. “How could these smiling, service-minded people line up such wicked people to lie about me?” she asked. Answering her own question, she quipped, “They are all politicians. What more can I say about them?”

She proceeded to express her affection for all, “even Charles Tyson,” as being nearest and dearest to her heart. She also acknowledged her sister Cathy as, “my compass, and a dynamic role model.”

Bench also gave thanks she was raised by the parents who taught her the importance of a sense of humor, and concluded by saying she was thankful her husband Steve was not one of the roasters.

“Because he would have really told the truth,” she said.