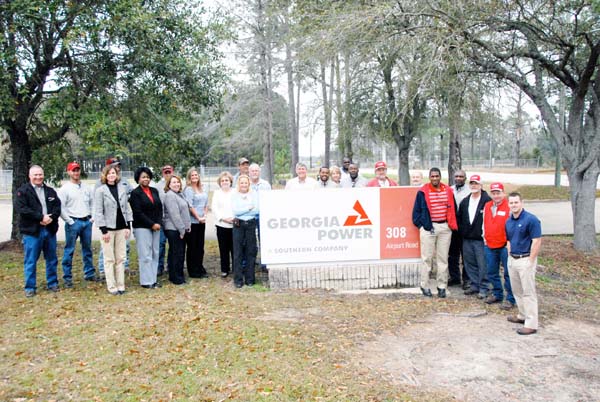 Bainbridge Georgia Power employees were recently honored with two awards commending their service to power customers at home and away from home after severe storms caused widespread power outages in 2012.

Edison Electric Institute (EEI) has honored Georgia Power with both of the association’s longstanding Emergency Response Awards — the Recovery Award and the Assistance Award.

Bainbridge area employees attended a luncheon Thursday, which was held in their honor to thank them for the hard work and dedication they put forth to achieve this award.

Employees from the Bainbridge Georgia Power office also traveled to Arkansas this past December after a bad winter storm damaged power lines there.

“The assistance award is an honor for Georgia Power and is well deserved by our employees,” said Georgia Power Area Manager Joe Truhett. “Our Bainbridge employees have spent many hours away from their families in severe conditions to restore power to our customers and those of our neighboring utilities. The recovery award also honors the employees that remained behind to keep the lights on at home.”

Truhett said Georgia Power and its parent, Southern Company, are part of the Southeastern Electric Exchange, which has mutual aid agreements in place with other utilities around the United States. If a bad storm or natural disaster were to affect south Georgia, employees of other power companies would come help out here, he said.

“Often times, we get a call to have a team of employees ready to go to a storm-damaged area within 24 hours,” Truhett said. “Usually, we have several employees volunteer to travel. Their families are understanding that it’s just part of what we do. Without electricity, things can get pretty rough for people who have been affected by a storm.”

Considering the three events together, company storm teams comprising nearly 1,400 employees spent 41 days enduring hard work, difficult weather and often-challenging living conditions away from home. Almost half of that time was spent on the Hurricane Sandy restoration, which also represented the company’s largest deployment since Hurricane Katrina in 2005.

BC personnel place a temporary sign at the college, to demonstrate the name change.|Submitted photo By DALE FULLER BSC Excecutive... read more