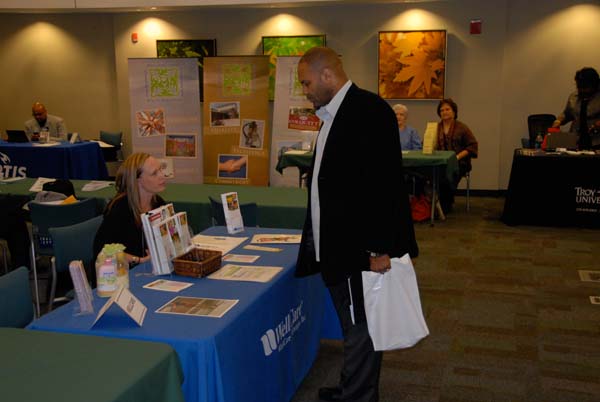 Carrie Skeen, the community outreach representative for WellCare of Georgia, talks with Bainbridge College student Terry Brown about careers with her company.

The event was co-sponsored by the Georgia Department of Labor and Bainbridge College.

Mel Wages, with the Georgia Department of Labor’s Field Services Division, said this is the fourth year the job expo has been held in Bainbridge and noted it has continued to grow.

“There was a line of about 100 people waiting outside [the Kirbo Center] when we opened the doors at 1 p.m.,” Wages said.

Inside the Kirbo Center, there were representatives from approximately 50 employers or agencies waiting to talk with job-seekers or people looking for resources to improve their economic situations. Along with many tables set up for people to fill out job applications, there was also a station where volunteers from the business community helped job-seekers create or improve their resumés. 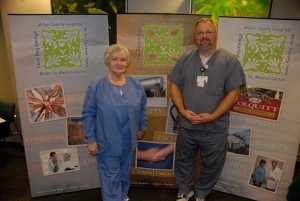 LPN Sue Dunlap and radiologist Russell Worek, both employees of Miller County Hospital, were at the job fair talking about careers in health care.

“I think this is a win-win event for both employers and job-seekers,” Wages said. “For job-seekers, this is a chance to meet with the actual human resources representatives from a variety of area companies. For employers, this event brings interest from hundreds of job-seekers that they would otherwise have to place an expensive ad to attract. Everything here is free.”

Even during the economic downturn, two fields that still have a high demand for applicants are law enforcement and health care.

“Being a police officer is rewarding for me because I am able to lead people to get the help they need for different situations they may have, as well as protect the public,” said Capt. Ernest Williams of the Albany Police Department.

Russell Worek, a radiologist at Miller County Hospital, which was also present at the job expo, said he enjoys making a difference in people’s lives by taking part in the process of diagnosing health issues.

Carrie Skeen, the community outreach director for WellCare of Georgia, said her company was present at the job fair, both to advertise open positions and to connect people with resources. WellCare helps manage benefits and services for people who qualify for Medicaid. They are one of four CMOs in Georgia and have operations in other states as well. Locally, they partner with the Friendship House of Jesus to help families know what services are available to them.

Tory Brown, who is a Bainbridge College student majoring in psychology, was at the job fair learning about different careers. He is currently a pastor at an Albany-area church but hopes to become licensed to work as a Christian counselor. 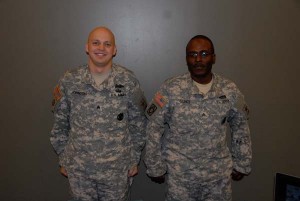 Representatives from the U.S. Army’s Albany and Thomasville recruitment offices were also present at the job expo. Sgt. Troy Johnson and Sgt. William Gaines, both of whom have served multiple overseas tours of duty, said that while parts of the world are in crisis, they both enjoy their jobs.

“I tell people who are interested in the Army that it’s an opportunity to have a career and go to college with your expenses paid for,” Gaines said. “Not everyone who goes into the Army is going to be on the front lines. There are more than 180 jobs we have openings for, including truck drivers, plumbers and mechanics. You can get training to do those jobs, and when you leave the Army, you’re ready to go into those fields.”

“My family has a history of military service but they were a little nervous when I joined the Army’s infantry,” Johnson said. “They knew the dangers and supported me all the same, because they love me and know I’m good at what I do.”