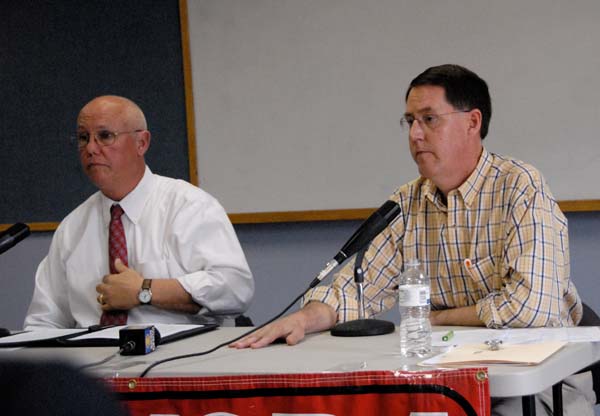 On the left, Mike Keown; and on the right, Dean Burke. Both men are candidates in the Georgia State Senate District 11 Special Election Runoff to be held Feb. 5.

Dr. Dean Burke of Bainbridge and Mike Keown of Coolidge, the two candidates in the state Senate District 11 special runoff election, participated in a forum held in Cairo, Ga., on Monday.

The debate was held at the Roddenberry Memorial Library in downtown Cairo. The event was sponsored by Cairo radio station WGRA AM-790 and moderated by the station’s Jeff Lovett.

Keown said his previous stint in the Georgia House of Representatives and other elected offices had not changed who he was: a Friday-night race car driver, the pastor of a small Baptist church and someone who has felt “called to serve” in public office. Keown said he would work to earn and keep the trust of his constituents if elected. 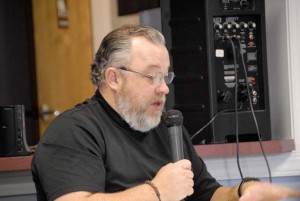 Burke said his priority, if elected, is to be an effective legislator by working with legislative leaders and listening to his constituents.

“Rural legislators are outnumbered [in Atlanta],” he said. “How are you going to get anything passed if you’re not willing to work with folks up there? If I’ve heard anything from people I’ve talked to around this district, it’s that you have to be able to work together to get things done.”

On economic development, Burke said he would support agri-tourism as a non-traditional revenue source for farmers and said he would like to see more warehouse and packing facilities built in Southwest Georgia.

Keown brought up a “jobs bill” that he said the legislature passed in 2010 but was vetoed by then-Gov. Sonny Perdue. According to Keown, the bill would have extended tax credits to large businesses who pledged not to lay off employees. The bill, which Keown said he would like to see re-introduced to keep Georgia competitive with other states, would have also reduced the state capital gains tax. 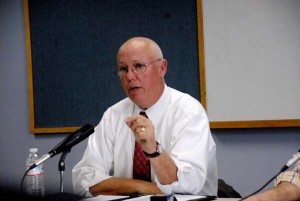 On the issue of public safety, both candidates said they supported the constitutional right to bear arms. Burke, who said the “No. 1 issue” of government is to protect its citizens, said he would be in favor of restoring budget cuts that state and local law enforcement agencies have endured.

Keown, who noted that his son is a policeman, said he believed emergency response personnel are often underpaid for the nature of the work they do.

Keown said he supported a bill proposed in the current legislative session that would allow certain school staff to carry guns on school grounds, if they had handgun and crisis training.

On the issue of education, Keown said he would like to see the state government restore budget cuts that have led to the implementation of furlough days for schools in Decatur County and across the state. 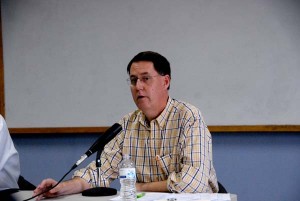 Burke said he believed there “is perhaps an over-emphasis” on testing in schools.

“As a result, teachers are spending less time teaching,” Burke said. “Curriculum, guidelines and testing [are always changing] … we need to come up with a common-sense approach. Listen to the educators in communities and let them tell you what needs to be taught.”

The candidates were asked whether they believed the state government would be able to afford to pay for certain portions of the federal government’s Affordable Care Act, such as expansion of who is eligible for Medicaid.

Keown said he did not believe a solution to fund those measures currently exists. Keown quoted Gov. Nathan Deal as saying he expected 2013 to be the state’s worst budget year since 2009.

“The thing about health care anyway is it’s all our money — if it’s federal or state, it’s still our money and we’re going to have to pay for it,” Keown said.

Burke, who is an obstetrician/gynecologist, said the expansion of Medicaid could cost the state as much as $10 billion over the next 10 years.

“That would basically bankrupt our government as we know it,” he said. “Obviously, I’m not for that, I don’t think Georgians can afford that.”

Both candidates said they believed that Deal made “the right decision” not to implement a state health care exchange in Georgia.

The special election run-off is set for Tuesday, Feb. 5. All Decatur County voting precincts will be open from 7 a.m. to 7 p.m. on election day, along with voting places in eight other southwest Georgia counties.

Early voting will be conducted each day next week between 8 a.m. and 5 p.m. at the Decatur County Fairgrounds off Vada Road. Friday will be the last day of early voting.

Listen to the full debate by clicking on the link below. The running time is 57 minutes.